Fall Camp begins today or, more accurately, FALL CAMP BEGINS TODAY! Here are some players who figure to make an impact one way or another. Feel free to list yours in the comments.

1. DE Tyler Horn - A grayshirt last year, Horn will be competing for the Broncos' No. 4 defensive end spot this fall, which would mean major minutes in games and major strides in the girlfriend department. Horn's main competition is Kharyee Marshall who was a breakout star last offseason and who, yes, still weighs 216 pounds.

2. CB Bryan Douglas - The redshirt freshman is currently the team's No. 4 corner behind Jamar Taylor, Jerrell Gavins, and Antwon Murray. Will Douglas be a Taylor clone or a Murray clone? Or will he be his own person with his own likes and interests? Hopefully a Taylor clone.

3. RB Jay Ajayi - I know Jay Ajayi thinks he is the real deal, but I would be curious to know what others think, too. Just kidding. No, I wouldn't. I'll take Ajayi's word for it.

5. WR Tyler Shoemaker - Chadd Cripe called Shoemaker a "proven threat" in his column yesterday. I am not convinced yet. But don't worry, it took me a good three years to come around to The Office. 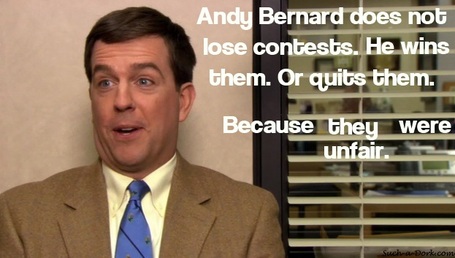 7. SS Cedric Febis - Someone has to start at strong safety, and Febis seems to have the best shot out of everyone despite missing spring ball with an injury. His edge: Dutchness.

8. K Jake Van Ginkel - Fall Camp will be the first time fans get to see Van Ginkel kick, and it also happens to be the biggest audition of Van Ginkel's young career. Do well, and he figures to supplant Dan Goodale as the team's kicker. Do poorly, and Van Ginkel replaces Bill Grammatica as my go-to special teams joke.

9. OG Chuck Hayes - Hayes did something over the summer to leapfrog Jake Broyles on the depth chart at right guard. So whatever that was, he better keep it up. He and Broyles are expected to compete right up until Georgia week.

10. RB D.J. Harper - He's healthy, finally, and he should be practicing at 100 percent. He's also wearing No. 7, hoping for that Mike Coughlin voodoo, I guess.

11. P Trevor Harman - Harman unleashed the Punt of the Century during the spring game, but kicking the ball 80 yards is no guarantee of a starting role. It will be important to watch Harman and Brad Elkin compete this fall and see who has the complete punter package - length, placement, and least dorkiness.

12. QB Grant Hedrick - You guys remember how much fun it is to fall in love with new quarterbacks every offseason? Well this year it's Hedrick's turn. Joe Southwick's backup job is not guaranteed, so if Hedrick plays his cards right, he could be Kellen Moore's No. 2 this fall and have the inside track on the starting job in 2012.

13. CB Jerrell Gavins - Gavins all but sewed up the No. 2 corner spot in the spring, so the fall will be his chance to get comfortable in his starting role. He'll see some good challenges from Shoemaker and Geraldo Boldewijn.

What players do you expect to be under the spotlight this fall? Which ones are you most excited to see that aren't named Martin, Doug or Moore, Kellen? Let me know in the comments.

This post is brought to you by the Marines. Go Marines! Beat terrorism!