Join me after the jump for some depth chart analysis, and share your thoughts in the comments about what it all means. Does it mean anything? Does it mean everything? Let's discuss.

Disclaimer: Depth charts mean as much as you want them to mean. Keep in mind that things change over the course of a game week and that game situations, injuries, and performance will render some of this depth chart moot. Still, it's fun to speculate ... with hyperbole! Mitch Burroughs is cowboying Kellen Moore's spotlight! 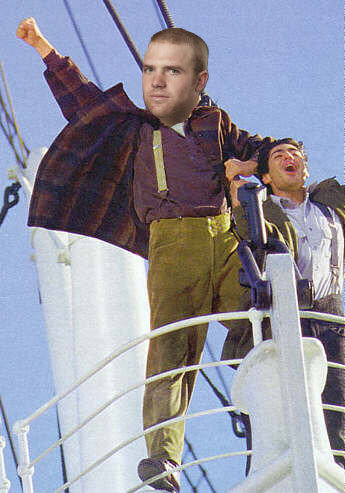 For my money, the biggest surprise on Boise State's depth chart was the Mitch Burroughs Experience finding a place in the starting lineup ahead of Tyler Shoemaker in the wide receiver spot previously held by Austin Pettis. I have a few theories on this, none of which have yet to convince me this is something other than a late-night-salsa-induced dream.

Theory No. 1: Tyler Shoemaker's skills are better served at slot receiver. What those skills are and why they wouldn't transfer to the outside are beyond me. It could be that Shoemaker has trouble getting off bump-and-run coverage, his frame and athleticism are better served in the middle of the field, or he hates change.

Theory No. 2: Mitch Burroughs had an incredible Fall Camp. It's entirely possible that Burroughs simply beat Shoemaker for the starting spot on the outside. He had a good Fall Camp from the way it sounded, and he has lots of experience in the Bronco offense. But man, what an upset that would be. The depth chart has made us roadies on the Mitch Burroughs Experience World Tour. Next stop: Hotlanta!

Theory No. 3: Tyler Shoemaker did not have a very good Fall Camp. Neither did Kirby Moore or Chris Potter, apparently.

More Mitch Burroughs in places you might not have expected

Doug Martin and D.J. Harper are taking a back seat to Burroughs and Chris Potter in the kick return game on Saturday. This may be a measure to keep D-Mart and D-Harp fresh, or it could mean that Boise State has been keeping BurrPott hidden away as a secret weapon all these years, like nanotechnology in that G.I. Joe movie. I'm hoping for the latter.

The Matt Miller era is upon us. Rejoice, Montanans!

The former Mr. Montana and current Achilles rehabber Matt Miller made headlines in his home state and caused oohs and aahs in the OBNUG offices by earning a shared starting role with Geraldo Boldewijn, everyone's favorite new receiver. Well now who's supposed to be our favorite new receiver? This is all so confusing.

Miller had a great Fall Camp, which surprised a lot of people since he was still coming off an Achilles injury. Now he figures to see a lot of playing time Saturday night in the biggest (and first) game of his college career.

I shall call him Stud

Chadd Cripe took a guess at the projected depth chart on Sunday (more below), and of particular interest was his calling Shea McClellin's defensive end position "Stud."

Now, this may mean nothing, especially since the official depth chart had McClellin listed at the SE position (which I take to mean Strongside End). Or it could mean that we'll see McClellin and McClellin's backup in both a three-point stance and a stand-up stance at varying times throughout the game. The Stud could be the new Nickel - a hybrid DE/LB demon from hell and part of Boise State's slow conversion to a 3-3-5 front. Here's hoping.

Though no true frosh show up on the two-deep depth chart, Coach Pete has promised that defensive end Tyler Horn will play (as the fourth defensive end, presumably) and linebacker Blake Renaud will play (as the fifth linebacker, one would assume) and wide receiver Dallas Burroughs will likely play. Here's hoping the Burroughs family splurged for The Mtn channels this year.

Other freshman we may see on Saturday include running back Jay Ajayi, nickel Corey Bell, and safety Lee Hightower. The jersey numbers for these newbies are as follows:

Ha! Just kidding. Boise State still hasn't decided who its starting right guard will be. The depth chart totally had you going on that one.

Michael Frisina is the more accurate of the two, hitting anything and everything inside of 42 yards. Dan Goodale has the stronger leg of the two, hitting from outside of 42 yards and chipping in on kickoffs should anything bad happen to Trevor Harman. Oh, if only science had evolved to the point where we could merge two humans into one. What have you been doing with your time, scientists? Quit working on Coke Zero!

Updated weights have been spotted on the Boise State online roster, so I did what any good Bronco fan would do and entered all the new weights into a spreadsheet, compared them to the old weights (as of August 18), and came up with this fancy little Google Doc.

The man with the most weight lost was DT Greg Grimes who went from 288 pounds to 268 pounds. Faraji Wright was right behind with a drop from 291 to 275, and Kyle Efaw lost 15 pounds, from 242 to 227. Among the biggest weight-gainers was new starting right tackle Charles Leno who gained 16 pounds and is now up to 294.

Of note, Boise State has seven players over 300 pounds, topped by offensive lineman Adam Sheffield at 313. By comparison, Georgia has 16 players who are 300 pounds and up, led by defensive tackles Jonathan Jenkins and Kwame Geathers who each go 350 or better. That's just too much person, if you ask me.

Boise State will be without the services of the following players for the Georgia game.

As is their wont, several Boise State players are on the precipice of team records. Here is the latest update on their pursuit of greatness:

What do you make of Mitch Burroughs in the starting lineup? What does the Matt Miller - Geraldo Boldewijn job share say to you? Any other surprises you discussed with your significant other last night? Share your thoughts in the comments.