Happy Thursday, everyone we're on Nike uniform watch today along with our recurring churro machine watch. 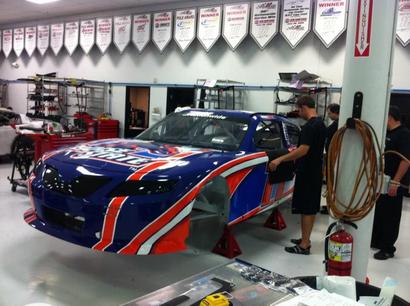 This story has been in the fan shots since yesterday, but I didn't pay too much attention to it since it is just NASCAR. But then our own SB Nation Atlanta had to go and say it was a terrible idea to have a Boise State car in Atlanta on the same night as the Boise State vs. Georgia game. Then Dawg Sports had to go and pull the "our track in our state in our sport" crap (all tongue in cheek, I might add). Now I'm feeling pretty steamed. It is on!

Great news for the former Bronco and 5th round draft pick. Maybe he can finallyclaim Boise State during MNF games?

Sounds like it was quite close. I would make a quip about Georgia barely beating their own scout team, but you need to recognize how deep these ESSEEESEE teams are and that the scout team would probably start for any team in the MWC. Just remember that, folks.

Boise State has announced color schemes for the entire year

This is getting serious. I can't believe the whole year is already mapped out.

Join me after the jump for some more links

The senior class has the opportunity to set the school record for the class with the best record.

The 2/7 odds are pretty remarkable. That pretty much guarantees action on any other MWC team.

That means he has excelled in community, classroom, character and competition.

A nice piece on Kellen Moore

Although it includes the obligatory comment about his arm not being NFL caliber. Oh well.