Top 25 analysis: Is Boise State where it should be?

Share All sharing options for: Top 25 analysis: Is Boise State where it should be?

Boise State is again a Top Ten preseason team. How great is that?

I'll be honest with you: I have no problem with a No. 7 ranking (or a No. 5 ranking from the AP). Maybe I'm still stuck in the Golden Era when any sort of preseason ranking was heaven on earth. I just think having a Top Ten team from a non-BCS conference is pure gold. Boise State lost several key players from a team that began last at No. 3 and they have more unknowns than usual. Anything in the Top Ten should be gravy.

Where I could buy an argument for No. 7 being a slap in the face compared to a No. 5 is when it comes to upward mobility. The higher you start, the easier it is to break into the coveted Top Two. But this early in the season? Doesn't really matter. All six teams in front of Boise State could lose. Two teams behind Boise State could jump them. I will save my righteous indignation until Week Eight or so.

It is hard to fault a guy for turning in a wacky preseason poll. Isn't the very premise of a preseason poll wacky? I imagine Miller meant well, but anytime you vote Boise State six spots lower than TCU you are going to draw the attention of my passive aggressive blogging. Fear my run-on wrath!

Miller wasn't the lowest Bronco voter, but putting BSU at No. 12 and TCU at No. 6 is a special kind of bizarre. Perhaps he was trying to reward teams for their performances last season (he was the only fella to have Northern Illinois ranked). Perhaps he is a TCU homer. I have no facts, so I'm just going to assume the latter and start hating his guts until his next poll. Tough nuts, Phil Miller.

The current worst voter on the Pollspeak websiteis John Clay of the Lexington Hearld-Leader who has USC at No. 12. Yes, that USC. 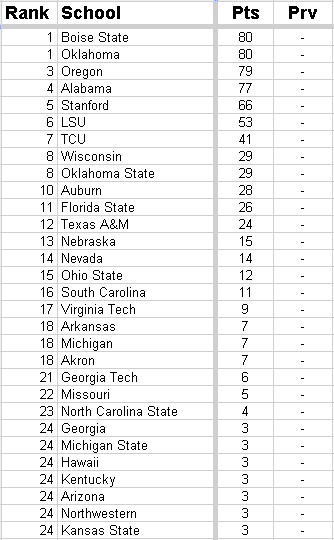 There is madness to every method of preseason voting. How can you accurately rank teams if you haven't seen them play? For that reason, many OBNUG pollsters submitted their ballots with an open mind. MKingery ranked teams in alphabetical reverse order of mascot names (skipping the Vandals, natch). I ranked teams based on last season's final AP poll.

And more than a fair share of people voted with their hearts, which is why you see Boise State at No. 1. Hey, voting with hearts is just as good as voting with presumptions this time of year.

Abstained from voting due to washing their hair: no one.

We as a voting collective are full of biases and whatnot. We need help..How can we make this poll better? What teams would you change or move? Share your thougthts in the comments. The final version of the poll gets submitted to the almighty BlogPoll.