Drew is taking a much-deserved sabbatical for the rest of the week. And what a day to start it.

We've got 11 days until kickoff...so today we'll be highlighting #11 on the Boise State roster - that Kellen Moore guy.

How’d he get to The Blue?

Moore was a very talented high school quarterback who garnered few looks from Division 1 programs.  Moore grew up as a coach’s son in a small town in the wine fields of the Columbia Basin. Not far removed from apple country, Moore accompanied his father to team practice as soon as he could walk.  It was during this young period in his life where Moore received much of his uncanny knowledge of the game by simple osmosis.  He watched.  He watched more, and he carried a notebook in which he wrote down plays he thought would work and other observations from practice.

When his time came he hit the ground running (or passing).  Moore got off to an extremely solid start as a sophomore in high school, throwing for 2,442 yards and 39 touchdowns with 11 interceptions on 179 completions to 308 attempts.  Moore’s numbers only got better with time.  As a junior he threw for 4,600, 66 touchdowns, on 317 completions.  Moore’s senior season he totaled 4,269 yards and 67 touchdowns on 287 completions.

As a senior Moore was Washington state’s Gatorade Player of the Year.  Moore was quite the player to watch in high school.  He is a big reason I came to be heavily involved in the Bronco Nation.  I watched him play on 3 or 4 occasions in high school, being as I grew up only 35 miles from Prosser.  Moore was the calmest high school quarterback I have ever seen play the game.  He knew the defenses inside and out and could have called the offensive plays had his father forgotten to get on the bus for the game.  I hoped my WSU cougars would have picked up the talented Moore, whose only other offers came from University of Idaho, and Eastern Washington University… the rest is history. 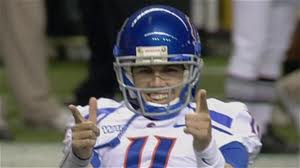 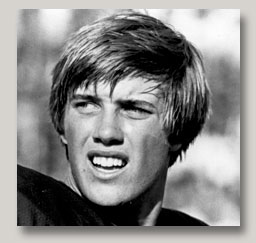 Throwing 3 interceptions in a narrow victory against Nevada his freshman year, two of which were returned for touchdowns.

I think this year will be as good as any of Moore's previous seasons.  We all know that Austin Pettis and Titus Young are gone, which will cause us to drive the field a little bit more. But this year will provide a little bit of a guessing game for teams to figure out who will be Moore’s top target.  Moore will do a dandy job of spreading the wealth to many of his receivers and at least three tight ends.  Put that in your pipe and smoke it….. The Broncos boast the return of All WAC running back Doug Martin and have stability in the back field to take the pressure off Moore. All this said, Moore throws for 3,500 yards and gets to play in the fourth quarter more than once.

Assisting Kellen’s father and the doctors at baby Kellen’s delivery was coaching legend Tom Landry.  After the delivery, taking place in the hospital nursery, was Kellen’s first coaching meeting with his father Tom and Coach Landry.