Happy Monday, everyone. It's so close I can almost taste it. 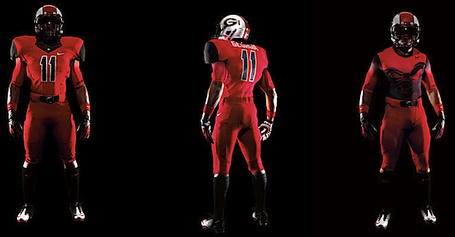 What are your thoughts? Georgia fans are conflicted. As for Boise State's uniforms for the Chik Fil A Kickoff Classic, I've seen some alleged photos of those too. However, they look a lot like the uniforms used in the Utah game last spring though. Plus, Mr. Hawkes from the Blue & Orange Store says they aren't due to be revealed until Wednesday. So we're not buying it until we hear confirmation from our Nike PR contact.

Chadd Cripe has some additional notes from Saturday's scrimmage

Jarrell Root has the quote of the day when describing his sack on Kellen:

The line split and I just got the holy path to Kellen and you just don’t mess with the money. I’m a little upset with myself for throwing him down.

No, you certainly do not mess with The Money. And I think we have a new nickname for Kellen!

Athlon Sports names their Top 25 players in the MWC

Boise State places 7 on the list with poor Chase Baker just missing out on the Top 25 to make it 8 players. I hope this continues to feed his fire as the most under-appreciated members of the defensive line.

Join me after the jump for some more links and the birthday list.

Stewart Mandel and Andy Staples answer the most important question Boise State will face this season. What uniforms will Boise State wear at home this season? Where's the churro machine? What is it??

Seriously, what are they thinking? Is anyone really dying to know who is projected to play in the inaugural Famous Idaho Potato Bowl? Why not have bowl projections for the next 10 years that just get continuously updated?

It seems like the OBNUG birthday list comes in bunches. Yesterday it was former Bronco and current Detroit Lion player Titus Young's birthday along with current player Michael Frisina and reader PeaDiddy. For today, Happy Birthday to readers Dothework and PrfctSpcmn. Hope all your dreams come true!

Get your birthday on the OBNUG birthday list by dropping us an email at tips@obnug.com