13 is an unlucky number for some, which is why I wrote today's countdown while rubbing a rabbit's foot and tossing salt over my shoulder.

His last name is French, so what better way to honor him than by giving him the nickname of that country's most famous killing device. 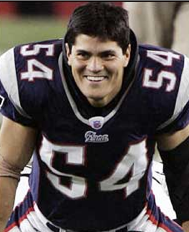 Renaud is one of the most highly-touted linebacker recruits we've had since Allen Mooney and John Michael Davis. Considering, neither player is still with the program, however, he's the one that gets to set the bar. Cross your fingers.

Renaud is as pure a middle linebacker as you're gong to find. He comes in as nearly the biggest LB on the entire roster, giving up just 5 lbs. to senior Byron Hout, and probably the most ready to play of any of the defensive freshman. De La Salle, Renaud's high school in Concord, CA is widely considered one of the best prep programs in the country, so Renaud is used to playing in a Division 1 type of atmosphere. After seeing him line up in yesterday's scrimmage, I think he has what it takes to play in 2011 as a true frosh. I'll put it to you this way, I think he's probably better than Byron Hout was in 2008, when the coaches burned his redshirt to play backup DE. The main difference is that Renaud will stay at LB, and could end up on the 2nd team before too long. What stood out to me about Renaud at the scrimmage was 1) his size...he's not your prototypical Boise State linebacker, and 2) his instincts—in on lots of plays, and very disruptive. If he absorbs the playbook quickly and took full advantage of summer workouts, he should be ready to go, and I daresay we'll see him as early as week one for the Broncos. He'll be a reliever, to start with, but I expect big things from this kid. If you can't wait too long, his high school highlights should give you a good idea of what he's bringing to the table.

At the behest of Howie Long, Renaud has been eating at least 3 bowls of Quarterback Crunch a day. 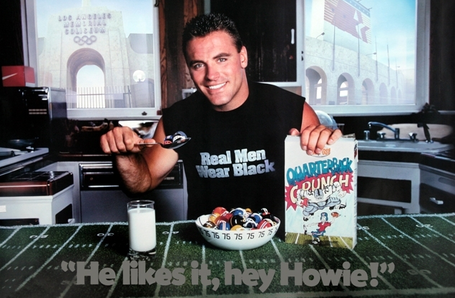