I have some Twitter accounts to get you started. It's an exhaustive list, but not nearly exhaustive enough, so feel free to add the names I missed in the comments. And if you still have no idea what to do with Twitter, I've included a primer on that. 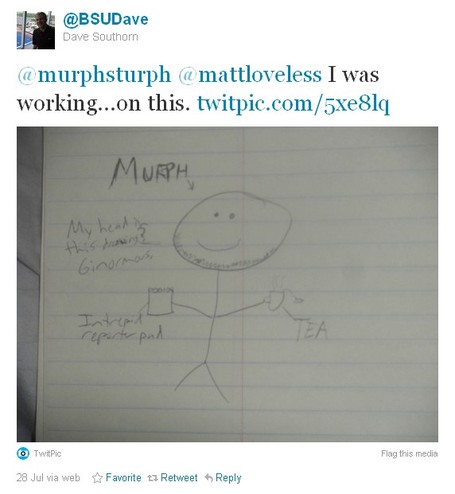 @slmandel If I'm Chris Petersen, I order white helmets and go straight storm-trooper for the Colorado St. game. Then I'd beat them by 1,000.less than a minute ago via TweetDeck

Dan Wetzel, Yahoo Sports columnist and author of Death to the BCS - @DanWetzel

Andrea Adelson, ESPN's non-AQ blogger when it's convenient for her - @aadelsonESPN

Spencer Hall, lead writer at Every Day Should Be Saturday - @edsbs

Joe Paterno up at B1G Media days. "HELLO TELEGRAPH LISTENERS."less than a minute ago via Seesmic twhirl

There are a whole bunch of Bronco players on Twitter, not that it does you any good to follow them right now. Still, once they graduate, you may find this list of players helpful.

My 80's iPod tune of the say....Love will tear us apart...by...Joy Divisionless than a minute ago via UberSocial for iPhone

still aliveless than a minute ago via web

To the idiotmobile.less than a minute ago via 18data custom

Twitter accounts are completely free, so there should be nothing keeping you from signing up for your own account other than a crippling fear of social media. Overcome that, and you're set.

Once you sign up, visit the accounts that I've linked here in this post. When you're looking at someone's account, click the "Follow" button, and that person's Tweets will then appear on your home page every time you visit Twitter. Eventually, you will have a homepage so full of stuff that your eyes will bleed just thinking about it. That's when you switch to lists, which help organize the people you follow into manageable chunks. Consider getting started with some of the OBNUG lists if you'd like.

Note: You can be on Twitter and never send a Tweet. In fact, that is my preferred method of Twitter use. Just read what everyone else writes. It's not creepy, it's resourceful.

What Twitter accounts do you think should be on the list? Any players, commenters, local media, or others that I missed? Do you have some pro Twitter tips to share? Let me know in the comments.