Two weeks. One day. We got this.

We've got 15 days until kickoff...so today we'll be highlighting #15 on the Boise State roster—Tyler Jackson

I offered this one up last year as well, but seriously, you can't beat Carl Weathers references. 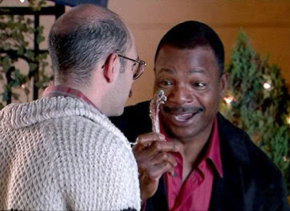 "Baby, you got a stew going" 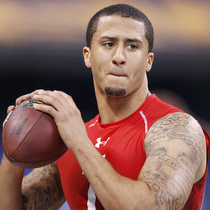 Me virtually guaranteeing no one will root for him this season by pointing out his resemblance to Colin Kaepernick.

Jackson is currently not on the Broncos' two-deep roster at wide receiver. That doesn't mean he can't be, and the hill he needs to climb to get significant reps isn't as steep as it was last year, but Jackson needs to make a big move in the next couple of weeks or hope for an injury—and honestly, what kind of sick person would do that? Jackson, as you are probably aware, was recruited as a safety, but George Iloka's death-grip on the spot led the coaches to switch him to wide receiver last offseason, and he's been there ever since. Jackson's got good size for the position and appears to have gotten his pass-catching up to par, but I wonder if switching over to receiver as a sophomore with all the talented depth already at the position hasn't put him at a distinct disadvantage. I know, personally, that he's not one of the first 5 or even 6 names that come to mind when talking about the WR corps. I think he'll likely back up Tyler Shoemaker, but I think he's at least behind Burroughs as well and at most behind Troy Ware or Matt Miller as well. I think with the WR committee approach this year, Jackson may get a chance to get some decent minutes if he can prove a go-to guy in practices, but I think he'll mainly be relegated to the latter portions of games for the Broncos this season. He's a smart, hard-working player, and I hope he can get more minutes than I'm assuming, but the Bronco depth chart is loaded right now, so naturally, a few players will hold down the bench more than others.

While living near Denver, Jackson had the distinct honor of having Dog the Bounty Hunter kick his front door down. Thankfully, it was just to ask to borrow a cup of sugar.