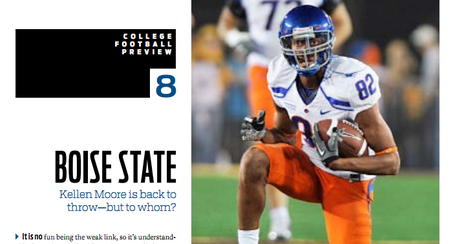 Boise State comes in at #8 in their preseason rankings and Sports Illustrated has a story on the prevalent theme for Boise State this year -- replacing Titus Young and Austin Pettis.

Other features in the issue are conference rankings (where the MWC is somehow ranked 7th behind the Big East), best coaches in college football (where Coach Pete comes in 3rd behind Gary Patterson and Nick Saban) and best game days (where Boise State doesn't make the top 10 /sadface).

Pick up a copy this week to check out all the details.

We've been hearing rumblings that it was going to be bad and the report didn't disappoint. Is there anything scarier these days then having a Yahoo! Sports reporter asking questions about their program? Wish ESPN's conflicts of interest piling up, Yahoo! Sports might be the best, most well funded and patient journalists in the nation right now.

They arrive there not based on pro potential, but overall college career

It's about halfway through if you care to listen but both say nice things about Boise State as a program and what Gene did for it.

Could durability be an issue for Pachall? Apparently he doesn't have that ginger toughness.

HT: DarthProphet for grabbing the video

And a very special Happy Birthday to our own dear Kevan Lee!

For some reason, Kevan forgot to put himself on the OBNUG birthday list but luckily he has a great friend like me to remember for him.