We're just a shade over two weeks out—you might want to start taking inventory of your foam fingers.

He's in direct competition with Geraldo, so this seems about right. Don't understand this one? Google it. 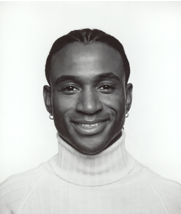 The WR spots vacated by Messrs. Pettis and Young have been the subject of the most hand-wringing and speculation this offseason, but the talent and depth at the receiver position may never have been better than it is right now. Obviously, we're staring at a sizable experience gap with the departure of the two record-setting wide-outs...but the cupboard is far from bare when talking about Kellen Moore targets, and by midseason, the cupboard may more closely resemble an arsenal. Burks entered Fall Camp as 2nd on the depth chart to the oft-hyped Geraldo Hiwat Boldewijn, but he'll see the field plenty this season, and don't expect much drop off between the top two spots. Boldewijn's hype is generally about his combination of speed and height, but as an aside, I think it's worth noting that in Spring testing, Burks was just one one-hundredth of a second behind Boldewijn in the 40, faster in the 3-cone drill, and gives up a mere 2-inches in height. In fact, Boldewijn, Burks, and Shoemaker were 2nd, 3rd, and 4th on the team, respectively, with their 40 times this Spring—all 4.4 or faster (Yeah, I'm shocked about Shoe's time as well). What this means for the Bronco passing game is that Kellen Moore will have some big, fast targets starting on September 3rd, and the experience gap will get closed in a hurry.

Furthermore, when you realize we have Kirby Moore, Troy Ware, Matt Miller, Mitch and Dallas Burroughs, and a slew of athletic tight ends waiting in the wings, it suddenly becomes clear why Kellen Moore seems to be one of the only people not worried about the departure of Pettis and Young. It does mean that we might not have one or two superstars this year, but that Kellen's yardage will be more evenly distributed through the entire corps (including tight ends). Burks will finish the season with between 3–500 yards receiving, in my opinion, and definitely will get off the scoring schnide.

Burks may have finished 3rd in the 40 and 1st in the 3-cone drill in Spring testing, but he finished dead last in the team limbo competition.