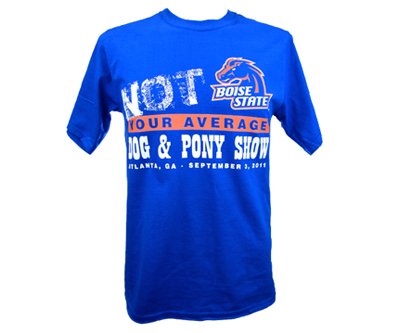 This did not appeal to Bleymaier because he knew people would see right through that. People are smart and very cynical. Good read at the Idaho Statesman if you like your quotes with subtext.

As many of us homer fans tend to do, Bill Connelly compares last year's Boise State team to the greatest teams of all-time ... the difference being he has numbers to prove it. Yay numbers (for now).

J Bates, do you have any thoughts on the next AD for Boise State?

No? You don't have any thoughts? OK, let's move on then.

Jeron Johnson finishes with a TFL, game-winning pass breakup versus Chargers (via: ECBF)

Phase One of Bronco Stadium expansion put on hold due to parking problem (via: bluNorange)

Hope Idaho never planned on going to a bowl ever again.

Are you a responsible person? With free time? I want to talk to you. Send an e-mail to tips@obnug.com.