We're at our 7th palindrome on the countdown (these occur every 11 days). The last two are gonna be doozies.

We've got 33 days until kickoff...so today we'll be highlighting #33 on the Boise State roster— Tommy Smith.

Smith was quite the baller at North Atlanta High School, as the youngsters say—earning 4 varsity letters on the gridiron and making the Atlanta Journal Constitution all-city team as a senior. Smith also pulled in 2nd team all-conference honors his senior year after making 87 tackles, 12 sacks, and 2 INTs. As a junior, Smith made 76 tackles and 8 sacks and added another 70 tackles and 6 sacks between his sophomore and freshman campaigns. Scout.com rated Smith as the 98th best safety in the country in 2008, and he fielded offers from Western Kentucky and Purdue. 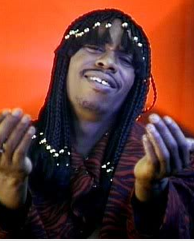 Team bully Kellen Moore finding out about his Atlanta ties in run-up to Georgia showdown. Tears were shed.

Tommy Smith has been remarkably productive for a guy that I often forget is on the team. His 49 tackles, 1 forced fumble, 1 PBU, and 1 INT are pretty darn good considering he's been somewhat lost in the LB shuffle (like the Super Bowl shuffle, but with more jazz hands) for the last 2 seasons. Smith, now a junior, is finally on the (admittedly tentative) two-deep going into Fall Camp and will be backing up Byron Hout at MLB. Given Smith's performance thus far, I'd say he has a good chance of staying there. The only real threat to Smith's playing time would be the possible emergence of true frosh linebacker Blake Renaud. Renaud will likely come in as our biggest linebacker, but has a bit of a hill to climb on learning the defense. Still, Renaud might be too good to sit this season, especially because the MLB position gets awfully thin after Smith given the departure of Derrell Acrey, Daron Mackey, and Allen Mooney. At least for the beginning of the season, Hout and Smith should be the 1-2 punch at MLB, with Smith spelling Hout every other defensive series or so. I think, in 2011, Smith finally breaks the 30 tackle plateau and we'll see plenty of him on special teams and maybe even at fullback. All-in-all, I believe that Smith will have another productive season, but he won't be so stinkin' quiet about it...erasing the Tommy Smith amnesia that Bronco Nation has suffered once and for all.

Tommy Smith was voted "Most likely to have at least 3 million people with the same name" by his high school classmates.