Boise State schedule preview: The UNLV Rebels and the art of being a bad team

Share All sharing options for: Boise State schedule preview: The UNLV Rebels and the art of being a bad team

Boise State left the WAC in part to get far, far away from the smoldering mess of has-been teams at the bottom of the conference. UNLV has a surprise for them.

The Rebels (along with New Mexico and sometimes Wyoming) are as bad as any bad WAC team, ranked in the 110s by preview magazines, and generally given no hope to compete in the conference. Will there ever be hope for UNLV? You can debate that after the jump. Plus, let's commiserate with head coach Bobby Hauck who used to coach at Montana and is not very used to this losing schtick.

Welcome to OBNUG's season preview series where we profile each opponent on Boise State's 2011 schedule and find them lacking in one or multiple areas. This one is about the UNLV Rebels. They lack pretty much everything.

What we learned from UNLV's 2010 season

New head coach Bobby Hauck was expected to reinvigorate the Rebel football program with some of the juju from his stint as head coach of Montana. That didn't happen. The Rebs got out of the gate by losing to Wisconsin (duh), Utah (expected), and Idaho (hilarious). The best news for UNLV is that they won the Brent Guy trophy by finishing as the best worst team in the Mountain West. They went 2-0 (their only two, mind you) against New Mexico and Wyoming.

What did Hauck and the Rebels learn in 2010? Besides how nice Montana was and how it shouldn't really matter that you have to drive three hours to a Dairy Queen? I can't imagine they learned much of anything, other than to schedule more D1AA schools and/or San Jose State.

Consensus: No one likes UNLV.

How excited UNLV fans are for 2011 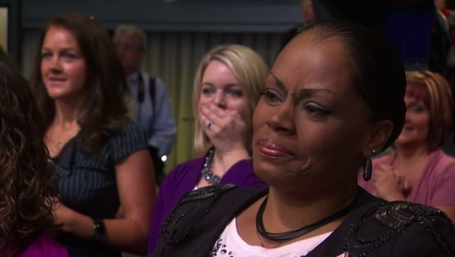 Skeptical and throwing up in their mouth a little.

The debate: Bobby Hauck will get the Rebels turned around sooner or later

Hauck is the right man for the job at UNLV, and once he gets his legs under him, he'll be fine. The man made Montana into one of the best FCS teams in the country. He can at least get this UNLV team to be competitive. Plus, the school will benefit from a conference minus Utah and TCU in the coming years, and they get a reprieve from Fresno with the Mountain West scheduling. Oh yeah, and there's that billionaire real estate guy who's going to build the Rebels a new stadium. Hauck has everything he needs. Just give him time. 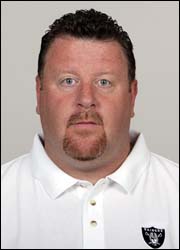 The Rebels showed absolutely no signs of competing last year and may have an even worse team this fall. Hauck failed to make a big move in his first recruiting class, and he has no one of note on tap for 2012. A new stadium will be nice, but UNLV is and always will be a basketball school first. Hauck has his work cut out to get this team turned around, and as yet, he has shown no signs that he'll be able to pull it off. 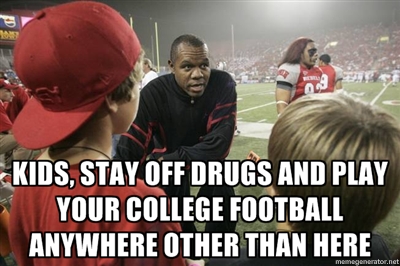 UNLV's offense summed up in a color

The Rebels will begin fall trying to decide on a quarterback now that former starter Omar Clayton has served his four-year cosmic sentence and no longer has to be UNLV's quarterback. Hauck has a couple of options in Caleb Herring and Sean Reilly, and he will take his sweet old time picking between one. In fact, he may pick neither. Or both. Who knows / cares.

The strength of the offense is wide receiver, which is a shame given the Rebels' quarterback situation. It's kind of like having beefy, ripped forearms and 12-year-old girl biceps. But boy, look at that forearm crumple that newspaper. Running back will be okay and certainly not as bad as the O-line where UNLV replaces three starters. In short, the Rebels are terrible at the positions that matter and adequate at the positions that rely on the terrible ones. Do not draft these guys to your fantasy team.

UNLV's defense summed up in a sandwich

Last year's defense gave up 39.7 points and 450 yards per game, and you can count the returning starters on a cartoon hand. Do not expect big things from this group. Hauck did have the presence of mind to sign some impact JC transfers, hoping and praying that they do indeed have an impact. JC All-America Princeton Jackson and special teams star Nate Carter are UNLV's best hopes at linebacker, where the team must replace everyone. Two decent corners will be back, too, although I'm not sure if they are decent in relation to the awfulness of the front seven or decent in actual, football terms. Probably go with the former, just to be safe.

Boise State vs. UNLV, November 5 - This day in history

The Broncos return to Sam Boyd Stadium, site of last year's Vegas Bowl, for a matchup with the Runnin' Rebs on November 5, 2011. For historical perspective and superstitious calendar karma, I turn it to Boise State's proverbial curator Tom Scott.

The latest showdown in a series of showdowns for Boise State's 1994 football team, as All-Big Sky quarterback Dave Dickenson leads top-ranked Montana into Bronco Stadium. A leaping Rashid Gayle interception sets the tone in the first quarter, and BSU defensive end Joe O'Brien leads a sack attack on Dickenson, who leaves the game in the fourth quarter. The Broncos beat the Grizzlies, 38-14, and go on to the Big Sky title and the Division I-AA championship game.

Whoa. Eerie Montana reference. This means something! (It means Bobby Hauck never should have left. Seriously, who is this guy's agent? The same one Jeremy Childs had? Sorry. Too soon.)

Projected record for UNLV when the Rebels face Boise State

UNLV will be one of the worst teams in Division I-A football, so it will take some special garbage to lose to the Rebs. Southern Utah is special FCS garbage, scheduled specifically for Bobby Hauck and gang to do something right. Hopefully that works out the way the UNLV brass intended (Southern Utah is a rather decent FCS team). Other than the Southern Uters, UNLV's best chance at wins will be in Pullman against Washington State and in Laramie against Wyoming.

And as an especially cruel twist of fate, the Rebs close with Air Force, San Diego State, and TCU in consecutive weeks. So much for that pipedream bowl push. 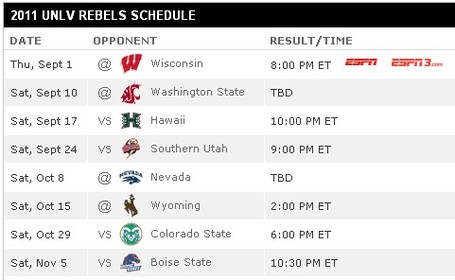 Glass-half-full prediction: Wins over New Mexico, Southern Utah, Wyoming, and Washington State, and Bobby Hauck gets to keep his job for another year

Glass-half-empty prediction: Losses to everyone, and Bobby Hauck wakes up to For Sale signs in his front yard

What do you make of UNLV's chances in 2011? Are you a fan of Bobby Hauck from his days at Montana? Randall Cunningham looks good for a 48-year-old, doesn't he? Share your thoughts in the comments.