The way things are shaping up for the Air Force Falcons, the 2011 football season could be a special one ... if they were playing in the WAC ... which is terrible. As it is, the Falcons have to contend with Mountain West bigwigs Boise State and TCU, and getting by both may be too much to ask.

Still, this year's Falcon team may be the best ever, and they should certainly be entertaining to watch all season long (and generous strength of schedule benefactors to boot). Could they pull the upset over Boise State or TCU and challenge for a BCS bowl berth? Of course they could. But simply being a Top 25 team may be a safer bet.

Full Air Force preview is after the jump.

Welcome to OBNUG's season preview series where we profile each opponent on Boise State's 2011 schedule and find them lacking in one or multiple areas. This one is about the Air Force Falcons. They are still learning this passing thing.

What we learned from Air Force's 2010 season

Air Force was very close to being an 11-win, one-loss team last season. Three of the Falcons' four losses - to Oklahoma, San Diego State, and Utah - were by a combined 10 points. Could you imagine Air Force in the Fiesta Bowl? I just did, and it was infinitely better than UCONN in the Fiesta Bowl. 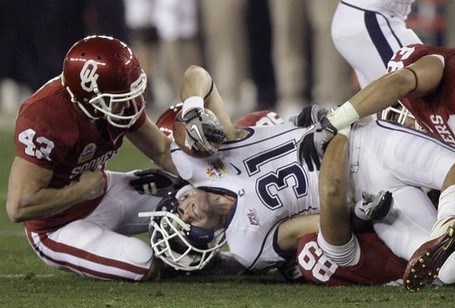 The Falcons did their damage with a run-heavy offense that gained 4,000 yards on the ground, and a stout defense that ranked No. 28 in the country. Not bad for a school whose primary purpose is to win wars. Well over half the starters return from last year's team, which has many in Air Force Country feeling optimistic about their chances in 2011. Fiesta Bowl optimistic? We'll see.

Consensus: People really like this Air Force team but just can't bring themselves to rank a service academy in the Top 25. Terrorist magazine publishers!

How excited Air Force fans are for the 2011 season 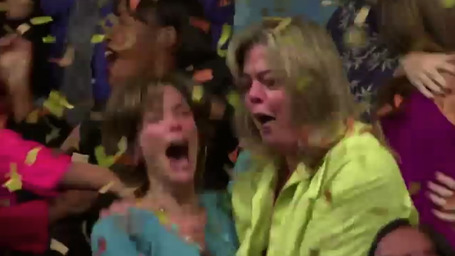 The debate: Air Force will be Boise State's biggest new rival in the Mountain West

This one seems inevitable. The two schools are geographically close and, once the dust settles on conference relocation, they will be two of the top teams left in the Mountain West. You can't have a rival without some semblance of competition, Idaho notwithstanding. Boise State and Air Force are programs torn from the same cloth. They do football right, so who's to think they won't do a rivalry right, too?

It would be nice if Falcons vs. Broncos became a big deal, but there is too much standing in the way for this rivalry to really take root. First off, the Mountain West schedule will make these two teams miss each other for the next two years. Second, Boise State will have enough rivals already once Fresno, Nevada, and Hawaii jump into the conference next season. And the best rivalries are the ones with teams that are your spitting image. San Diego State would be a better choice than the Air Force.

Also, you can get arrested for hating a service academy. I think.

The senior QB had a breakout season last year as a dual-threat option quarterback. Jefferson passed for nearly 1,500 yards and rushed for almost 800. He is the perfect player for the Air Force O. Think Tommie Frazier on Nebraska's great option teams (not any Rice quarterback from the past 20 years). Need proof that I'm not making this passing stuff up? Here's Jefferson throwing a touchdown pass ... from the shotgun, no less.

Air Force's offense summed up in a color

The old-school Air Force offense may be a little more prolific than usual this year. Sure, you will still have those tiny, athletic linemen zone blocking you to death and a cache of running backs and fullbacks dodge, duck, dip, dive, and dodging out of the backfield. But this year's offense also figures to be pass-heavy, relatively speaking. Jefferson has developed into a steady passer, and he has one of the best Air Force receivers to come along in awhile in WR Zach Kauth. If the passing game clicks, this offense could be one of the nation's best. In addition to Jefferson and Kauth, the Falcons have Jonathan Warzeka and Asher Clark and two all-conference caliber tackles. The Broncos are probably smart to start gameplanning already.

Air Force's defense summed up in a sandwich

The Falcon defense will be the ultimate deciding factor in how well this team fares in 2011. The secondary is expected to be the strength of the D, especially if CB Anthony Wright can return to his ball-hawking ways. The biggest question marks will be along the defensive line. The threesome up front may struggle against the run because of their size, and opponents may run a lot because of the AFA secondary. Ryan Gardner should be the best of the D-line bunch, but he's no Rick Ricketts (the defensive tackle whom the Falcons will sorely miss). Maybe if he changed his name to Ryan Ryansome ...

Air Force vs. Boise State, October 22 - This day in history

In a showdown between the top two teams in the Big Sky, Boise State beats Northern Arizona, 26-13, at Bronco Stadium. Freshman tailback Terry Zahner became the first Bronco ever to rush for 200 yards in a game, going for 205 against the Lumberjacks. Amazingly, a fellow true freshman would break that record the same season when Cedric Minter ran for 210 yards against Cal Poly.

Cedric Minter. Hmm, wonder if he turned out to be any good?

The Boise State game marks the end of a tough stretch for the Falcons with games against Navy, Notre Dame, and San Diego State in succession. The good news is that Air Force gets all its tough teams out of the way early (including a home game against TCU in Week Two). The bad news is that a 4-2 record may be as good as they can hope for. 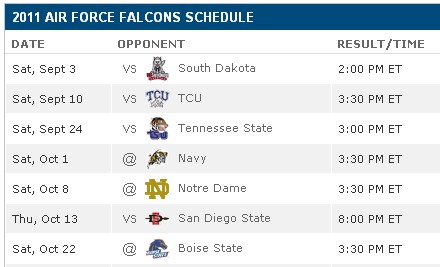 This Air Force football team would be a non-BCS darling in any other conference than the Mountain West. Contending with Boise State and TCU is just too tough (even for the entire Big East, probably). The Falcons will still field one of their best teams in school history, and they should get a nice, pretty bowl game for their efforts. Finishing third in the Mountain West (and beating San Diego State to do so) will be a good accomplishment. Anything more would be a huge, but not inconceivable upset.

Glass-half-full prediction: The Falcons beat everyone but TCU and Boise State, finish 10-2, and slide into the Top 25

Glass-half-empty prediction: The Falcons lose more close games than they should and limp into a bowl with a 7-5 record

What do you make of the 2011 Air Force football team? Do you think the Falcons will be Boise State's biggest Mountain West rival? Any chance Air Force pulls the upset in Bronco Stadium? Share your thoughts in the comments.