Sorry this one's going up a bit late today, folks. I know some of you were starting to panic, and martial law was about to be declared. Hopefully this will take the edge off.

Frankly, I had no idea Tozer was on the roster (and judging from his pic...I'm not so sure Boise State has found out either). I know he's a JC transfer, but believe is of the walk-on variety. Tozer was a three-year football letter winner in high school and earned first-team All-West Catholic Athletic League and second-team all-state honors as a senior. At Foothill Community College, Tozer was a two-time All-NorCal first team selection.

Sometimes these things write themselves.

Me opting to go for the "picture not found" sight gag, when a short google search turned up his actual image from Rivals.com: 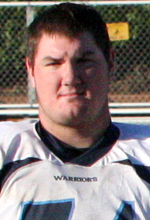 If we're getting 6'4" 300+ lb. walk ons that were all-conference performers for their JCs—we may have indeed turned a critical corner in our recruiting. Tozer adds instant depth (and width) to the Bronco O-line, another warm body for the practice/scout squads, and isn't currently taking up a scholarship. What could be better?

Tozer is actually a pretty solid looking prospect at guard or tackle (he played tackle at Foothill CC), and his size has to instantly endear him to Tim Socha, who is frankly sick of handing out protein shakes to incoming recruits at the airport. If Tozer's eligibility clock is wound correctly, he should have 3 years at Boise State to play two, and I think he's a likely redshirt for 2011. Beyond that, specifically 2012, Tozer can certainly insert his rather large frame into the race to replace Nate Potter. Yesterday, I gave Adam Sheffield the nod as heir-apparent with Potter and Waller both graduating this year, but Tozer could easily be a darkhorse at the position—after all, he'll have an edge on Sheffield in the all important experience category. Check out Tozer's highlight video below, and tell me he doesn't look like someone who could contribute in short order (he's #74)...