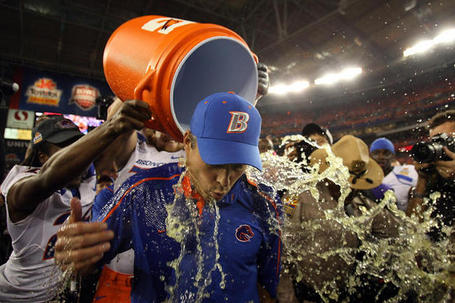 The Boise State football team will once again have huge expectations thrust upon their shoulders this upcoming college football season.  Most major media outlets and touting them as a top ten team to start the season with a couple even having them in the top 5 for the second consecutive year.  Personally with the questions at WR i think their preseason praise should take a little bit of a hit from 2010. But with the return of the beastly Doug Martin in the backfield, the positions sustained depth, and the 7 returning starters on both sides of the ball, they should easily be expected to sustain the same level of success we've seen from them the past two seasons.  This means they should be heavy favorites (and according to MWC coaches and media outlets they are) to take home the conference championship this season, dethroning an outstanding TCU Horned Frogs team lead by the masterful Gary Paterson. TCU will be breaking in a ton of new starters this season, including a new quarterback and should take a step or two back from their Rose Bowl-winning team a year ago.  It should not also be unreasonable for the Broncos to contend for a third BCS bowl berth and even a NCG appearance. 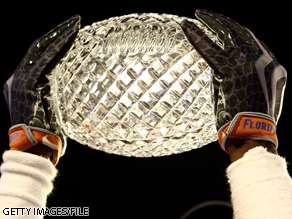 After the jump lets discuss our beloved Broncos strengths and areas of concern for the upcoming football campaign.

The Broncos return three starters from last seasons line. A group that allowed .6 sacks per game last year, good for 3rd best in the nation.  The protection plans the Broncos come up with normally include zone blocking strategies, requiring teamwork and allowing for newcomers each year to relay on their fellow lineman, and veteran big uglies, for support.  BSU returns their center, Thomas Byrd, and left tackle Nate Potter from last seasons squad.  Former starter Brenel Myers will be in the rotation as well, giving them 3 players with starting experience. Myers made his first collegiate start in the 2010 fiesta bowl against TCU and held one of the nations premier DEs, Jerry Hughes, to no sacks on the game.  In fact Hughes only got to Moore one time in the game.  The protection Moore has received from his line over the past two years has been outstanding and should be expected to only improve in the season to come.

The Broncos also ranked 7th natonally in rush yards per attempt last year, thanks in large part to their stellar O-line... and Doug Martin.  Martin rushed for a mind blowing 1260 yards.  That was good for a 6.3 yards per attempt average. He also reached the endzone 12 times.  Martin exploded onto to the national scene in a big way in 2010 and was named to the Doak Walker Award Watch List (nations top RB) for this upcoming season. The Broncos should continue to pound the ball between the tackles and set up the play action passing game that Kellen Moore conducts to perfection.

What really needs to be said here?  BSU has one of the top 2 quarterbacks in the country, and arguably the best in Moore.  Moore compiled video game numbers last season for the 2nd year in a row.  The Prosser WA product had a QB rating of 182.6 last year, good for #1 in the nation.  He had the #3 completion percentage in the country last year hitting on 71.3% of his passes.  He was #2 in the country in yards per attempt with and even 10.  #11's 2010 campaign was so good he earned an invite to New York and finished 4th in the Hiesman Trophy voting.

The receiving corps will be breaking in a couple new faces this year with the departures of Titus Young and Austin Pettis, but the Broncos return Tyler Shoemaker and Geraldo Boldwijn both of whom have big game starting experience and should seamlessly fill the void left by Young and Pettis.  Boldwijn averaged 14.5 yards per catch last year and started in the big games, taking the field at the beginning of the Va Tech game in DC.  Shoemaker will also be lining up on the outside with Boldwijn and should help continue the great receiving tradition at BSU.  The Mountain View High School product (MAVERICK PRIDE!) averaged 18.2 yards per catch last year and hauled in a respectable 5 TDs.  Considering who he was sharing time with last year, that is not bad.  Fiesta Bowl MVP Kyle Efaw also returns for his senior campaign.  He finished last year with 299 yards on 24 receptions, good for a 12.5 yards per catch average.  He also had and 5 touchdowns.  Chris Potter will round out the receiving corps.  The junior saw spot duty last year, reeling in 8 catches for 125 yards and 1 TD.

SCORING OFFENSE AND YARDS PER PLAY

Boise State was #2 nationally in scoring offense last year with 45.1ppg, and #1 in yards per play with 7.5. With all the returning talent you can expect more of the same from the Broncos this year. 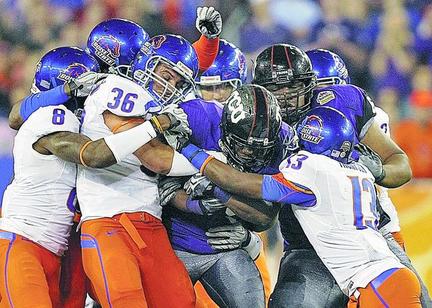 The Broncos were #3 in rushing yards per attempt last season, allowing 3.1 yards per carry.  Constantly putting 6 and 7 guys in the box can have that effect on opposing running backs.  The unit was also #6 in the nation with 108.2 yards per game.  With numbers like these, its hard to deny that BSU knows how to shut down teams trying to run the ball.  BSU return 3 of their 4 starting defensive lineman from last season in Billy Winn, Chase Baker, and Shea McClellin.  These three guys average 6'2" and 280lbs and finished the 2010 season with 3.5 sacks per game, good for #2 in the country.  The Broncos run a 4-2-5 base defense and the two starting linebackers will likely be some combination of Byron Hout, Aaron Tevis or J.C. Percy.  Hout is 6'0" 240, Tevis is 6'3" 232 and Percy is 6'0" 217. These three helped produce the stellar numbers put up by the Broncos rush defense last season, and should expect to take a step forward this year.

The Broncos start five players in their secondary. Holdovers from last year include CB Jamar Taylor and FS George Iloka.  Jerrell Gavins has made multiple starts in his career, and will hold down the sideline opposite Taylor.  Newcomers this year have big shoes to fill.  Former CB Brandon Thompson is now in the NFL as is the Broncos leading tackler from the last three seasons, SS Jeron Johnson.  Filling the voids left by Thompson and Johnson will be the previously mentioned Gavins at CB and senior Cedric Febis at SS.  Filling in for the departed Winston Venable at the Nickel postion will be Hunter White.  The Broncos secondary allowed 151 yards per game last year, good for the 3rd national ranking.  Boise State also had the #2 defensive passer rating in the country last season, with a 92.5 clip.  Expect more of the same from the shut-down passing attack from the boys in blue.

Boise State was #2 nationally in scoring defense last year with 12.8 ppg and also #2 in yards per game with 259. Just like on the offensive side of the ball you can expect to see more of the same this year with all the holdovers coming back.

Boise States entire team is a strength. The squad doesn't have a lot of weaknesses and should be very exciting to watch this year and again be a compelling story in the national media all season long as they attempt to become the first non BCS team to take home the crystal football.

Can you hear us coming? 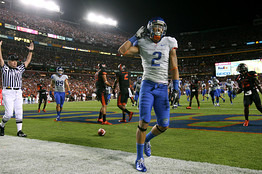 THANK YOU FOR READING, COMMENTS APPRECIATED!

What side of the ball do you have the most confidence in this upcoming season for Boise State?