One month. One week. That's all the longer we have to wait to see our Broncos take the field. This is going to feel like a long month and a week, isn't it?

Arizona has become a hot recruiting bed of late, thanks to the efforts of coach Scott Huff (who's an Arizonan himself). That's where the Broncos found Ebenezer "Ebo" Makinde, a seven-time letterman from Paradise Valley High Schoo. Makinde was named first-team All-Desert Sky Conference as a senior as well as first-team all-region and first-team all-state. Makinde played in the Arizona North vs. South All-Star game. Makinde was also a two-time 400m regional champion in high school. Makinde received a scout grade of 74 by ESPN's recruiting service and was offered by Arizona, SDSU, Utah, UNLV, UTEP, and Wyoming.

The guy's name is Ebenezer and he plays a position where stinginess is key. This one was served up on a silver platter. 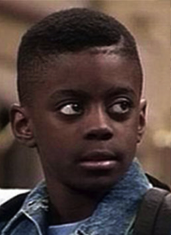 Another day. Another Bud.

Chest injury will likely have him miss the bulk of upcoming season.

Well, that didn't work out like I'd thought. With an impressive Spring Camp last year, it looked like Makinde—easily one of the fastest guys on the team—would be seeing significant minutes in 2010...he didn't. Of course, prior to last season, I had stated that 2011 would probably be his chance for a break out, however, with Brandyn Thompson being gone and the competition likely coming down to him and Jarrell Gavins. That much was true, but I failed to foresee a catastrophic chest injury to Makinde that will likely scrub his entire 2011 season, or at least most of it. Not two days ago—and thankfully before my Makinde profile—Dave Southorn reported the injury, and exactly what kind of chest injury would have a guy out that long is open to speculation. I think we'd know if it was a chest wound...so it's probably safe to say that it's some sort of pectoral tear or the like, which I've heard can take quite a while to get right. This really comes at a bad time for Makinde, who again had a good Spring and looked to really give Gavins a run for his money at the vacant corner spot. Kellen Moore was even impressed enough with Makinde's Spring to say the following:

"I think on the defensive side, Ebo Makinde is a guy that is getting those chances and making the most of them,"

Makinde could rebound quicker than expected and rejoin the team in time to get meaningful minutes this year, but my guess is that he's probably a write-off for 2011—leaving the corner duties to Gavins and Bryan Douglas. Douglas looks very promising as a redshirt frosh and Gavins has plenty of quicks and game experience. I think we'll be okay at the position as depth isn't a major concern...but it will sting a bit to lose Makinde on the depth chart as no player can match his speed (ran a 4.34 40 last summer) and behind Gavins and Taylor, his experience. Incoming frosh Eric Agbaroji or Lee Hightower could ascend the depth charts with more ease this Fall now that Makinde is out, but make no mistake, Gavins is the probably a lock at starter now. Makinde just needs to focus on getting healthy.

Makinde took "if you love it so much, why don't you marry it?" childhood taunts very seriously—this is why, in the state of Arizona, he is legally wedded to a Funnel Cake.