The 2011 Boise State football season will be a success if ...

Share All sharing options for: The 2011 Boise State football season will be a success if ...

Hello. To pass the time between now and fall camp, OBNUG will be writing essays about football things. Many of these essays will be true. Some may be fan fiction and involve Blizzards. Here is an essay now.

The Boise State football team will be good in 2011. I tell all my friends this. I tell complete strangers this. When people ask for an outlook for this year's Bronco team, I morph into Adrien Brody at the Oscars, sprinting up and down the aisles, kissing people on the lips, and breathlessly declaring my love for Boise State, cinema, and life.

But being good and being successful are two different things. We know the former will be true. So what about the latter? What has to happen so that we consider this year's team a success?

There is no right answer to this question. I wish there were because I live in a black-and-white world that thrives on structure and rules. Tell me that Boise State's season will be considered a success with a Mountain West championship and a bowl berth, and I will clutch that nugget so hard its little nugget hat will pop off. Tell me that a successful Boise State season means playing hard every game, win or lose, and I will burn you as a witch. Come on. No one thinks that.

No doubt getting a heads up on Boise State's goal sheet would be nice, but until someone leaks this year's Chris Petersen pyramid of success, we are on our own. So here goes nothing ...

I want Boise State to win the Mountain West conference championship and to earn a BCS bowl berth. Put another way: I would be disappointed if they didn't. 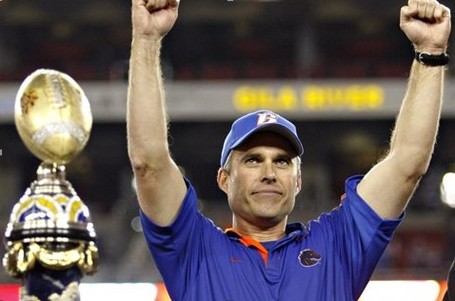 In order to pull this off, the Broncos are probably going to have to go undefeated, which is a somewhat unfair expectation for me to put on them. That would be like someone saying to me: I expect you to never have a typo ever again, and if you do, I will wear sackcloth and ashes for the next month. (Or should it be "I will wear sackclothes"? Nuts.)

But I think this Bronco team can handle it. Part of my setting the parameters for a successful season is weighing the team's potential against a number of factors like scheduling, experience, and quality of competition. As far as scheduling's concerned, this team has no Murderer's Row of games. With experience, the Broncos have the soon-to-be winningest QB in college football history, and they return seven of nine experienced players on the offensive and defensive lines. Quality of competition? Georgia and TCU are tough, but Boise State should be favored against both.

There is every reason to believe that this team can win all its games and resume its role as BCS party pooper. I expect it.

And usually I am one who tempers his expectations to avoid heartbreak and binge eating down the road. But not this year. It's the last season for Kellen Moore, and it feels like the last season of an era. I want to live on the edge with this team. I want to be inches away from complete and total breakdown and complete and total euphoria with every play. I want to age 10 years by the time this season is over. It is going to be incredible.

This team has what it takes to make my wildest dreams come true. And this year, my wildest dreams are a BCS bowl and a conference championship. No pressure, guys. It's only my well-being and sanity I'm investing.

Share your wildest dreams and great expectations in the comments, and don't forget to vote in the poll. Are you national championship or bust? Do you just want revenge over Nevada? Let me know.