(video via the OBNUG Intern and KBOI 2)

Boise State will not be allowed to wear its all-blue uniforms on its all-blue field for Mountain West home games this fall, thanks to a stipulation made by the conference when the Broncos joined last summer. Hmm, communist much?

For some fans, this ban is a slap in the face to the Broncos and borderline blasphemy. For other fans, it's only uniforms. No biggie. Where do you stand? Vote in the poll and share your thoughts on where you stand.

My take is after the jump. 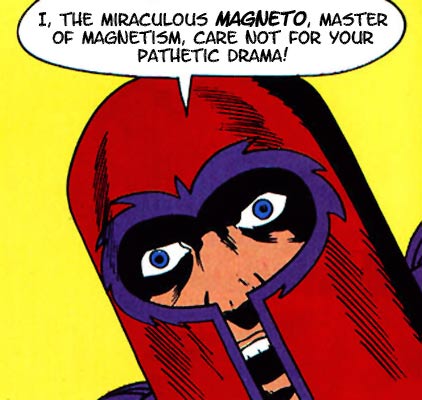 Too bad, Magneto! This is happening!

I am tempted to say that the Boise State uniform kerfuffle is completely meaningless because the Broncos will not stop being the Broncos just because they wear different unis. It certainly did not matter when BSU wore its Orange Death against Fresno State last year. It isn't likely to matter when the Broncos go gray-and-blue or orange-and-blue or blue-and-slightly-less-blue (my first choice, based on spite) this fall.

But then I think about this: What does the decision say about the Mountain West Conference?

Let's be clear: The only reason this rule is in place is because coaches complained about a competitive advantage. You know what else is a competitive advantage? Having Kellen Moore. Recruiting well. Winning Fiesta Bowls. Hiring Chris Petersen as a coach. Where do you draw the line? And what sense does it make to give opposing coaches - the absolute least objective people you can find - the authority to dictate rules?

That the MWC caved on this request says a lot about the way it conducts business: brash, selfish, and loyal to a fault. Any other conference would have interpreted the blue-on-blue complaint as whining and dismissed it instantly. Craig Thompson and gang embraced the request. It makes you question what lengths the MWC will go to and what teams it will walk all over and what authority it will misappropriate to make sure that the majority stays happy. It's a slippery slope.

But what's a team to do, Craig Thompson?

They could have said no (to the invite).

Karl Benson would have never done this to us.

Disregard everything I said above and vote on how big a deal you think this blue-on-blue drama is. Do you think this is tyranny at its finest? Are you mostly ambivalent and just ready for some football? Vote in the poll and share your thoughts in the comments.