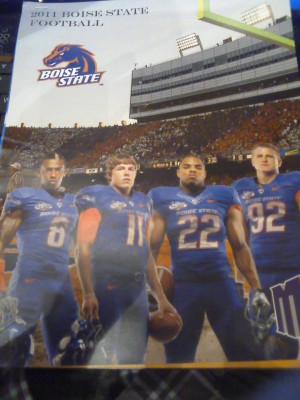 As teams are required to do at Mountain West media days, the Broncos released their preseason depth chart via the team's media guide. I will now pore over it like the seven-year-old version of myself pored over the Sports Illustrated for Kids issue with the made-up football teams.

Join me after the jump.

You did not see this depth chart, is what Coach Pete is probably thinking right now. The Bronco coach dislikes preseason depth and rankings as much as anyone you will find, which means that in order to get this depth chart, some intern had to spend a whole lot of overtime making stuff up. Still, I think we should speculate.

Chuck Hayes over Jake Broyles? Can't say it's a total surprise, considering how Broyles was an unknown before spring camp. Still, the newbie held down the starting spot all spring, so you wonder what changed.

The roster is stupid with ORs. Jarrell Root is sharing every defensive end spot in sight. All the linebackers are OR'ed up. The one spot where it seemed like an OR would fit best was at nickel, but Hunter White has that all to his lonesome.

You'll notice there are no true freshman on the depth chart, including future kicker Jake Van Ginkel who many think will be the starting kicker for the Georgia game.

Chris Potter over Kirby Moore. I have some thinking to do tonight.

The biggest surprise for me is probably not that big a deal to others, but I thought for sure that Ebo Makinde would be on the two-deep at corner. Instead, Bryan Douglas took his place, which means that either a) Douglas is really good or b) Makinde dropped off the face of the earth.

What surprises do you see on the depth chart? What stands out? Happy for Chuck Hayes? Conflicted about defensive end? Share your thoughts in the comments.