Nevertheless, media days are a great reason to be excited about football season, and there will be plenty to discuss with today's All-Mountain West reveal and player and coach interviews. Follow this post for the latest updates on all things Mountain West, and tune in on Twitter for breaking news and pants jokes. Keep that refresh button handy, we've got a lot of blogging to do.

Update 11:30 a.m.: Preseason poll and all-conference picks are in

And now for actual news stuffs ...

(all times Mountain, because of synergy)

All press conferences will stream live at the Mountain West website and will be posted to YouTube shortly after. TCU is the first to go, so you have a good two hours to kill between the Horned Frogs and the Broncos.

Cripe's all-conference team has Moore, Doug Martin, Nate Potter, Thomas Byrd, Billy Winn, Shea McClellin, and George Iloka, which is pretty much the group you'd expect to see when the list is revealed later this morning.

The Mountain West just announced its preseason picks and preseason all-conference team. Here they are:

The above poll is from the members of the media, of which there are probably at least three from the Dallas-Fort Worth area.

Of the preseason all-conference team, only TCU's Tank Carder was a unanimous selection, meaning someone with a crush on Ryan Lindley has some explaining to do.

Preseason players of the year

He and Cullen Moore and Doug Harper will make a pretty dangerous combination.

Boise State's media guide contained a preseason depth chart. I like depth charts so much I made new post out of it.

Tidbits via Twitter from Boise State's turn at the podium

Coach Pete, Kellen Moore, and George Iloka took to the podium this afternoon to answer media questions. Here are some of the most notable responses, relatively speaking.

Pete: "I don't think we have depth charts." ... So definitely don't read much into that depth chart I posted earlier.less than a minute ago via TweetDeck

Petersen says three fewer practices are spread across the month. Still has two two-a-days. ... Hasn't nailed down how to deduct 3 scholysless than a minute ago via TweetDeck

Petersen said he has not lost any players over the summer...also not sure on grayshirts.less than a minute ago via web

Whoever coach Yates puts at strong safety, we'll be fine - Ilokaless than a minute ago via web 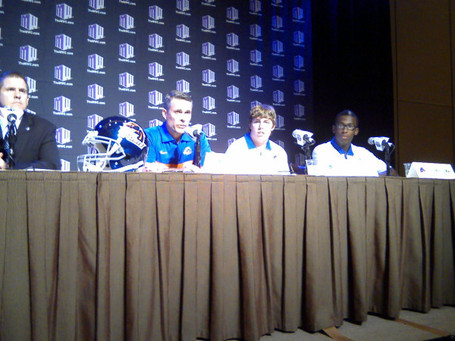 (Photo courtesy of Dave Southorn's camera phone, for my money the MVP of Media Days)

Only player expected to miss a game because of injury so far this year is CB Ebo Makinde, who has a chest injury and is out for a while.less than a minute ago via TweetDeck