It's Friday. Things are getting weird.

Not that there's anything wrong with that.

At SEC media days yesterday, Richt took the podium to wax poetic about the greatness of Boise State football. Here is a taste of the anti-smack:

As you watch their film, you realize that they are a special football team in the way they approach it. I've probably never seen anybody play any harder than they play as a team down after down, film after film. They are a very confident team.

Richt then tore off his shirt to reveal an elaborate chest tattoo of Coach Pete healing a man with leprosy, according to sources.

In related news: Sports site knows nothing. Seriously. Go there and read the site's justification for the pick.

And thus I pledge my allegiance to Austin Murphy. 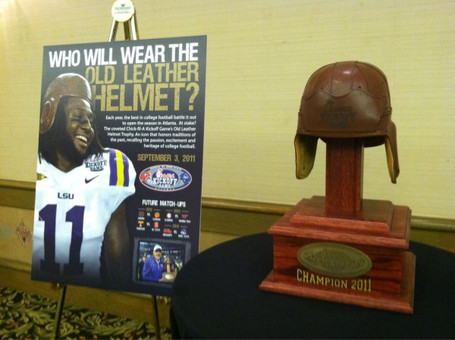 "Who will wear the old leather helmet?" Like, actually wear it? That thing has to be disgusting.

Happy birthday to OBNUG reader kcam. May all your birthday wishes come true.