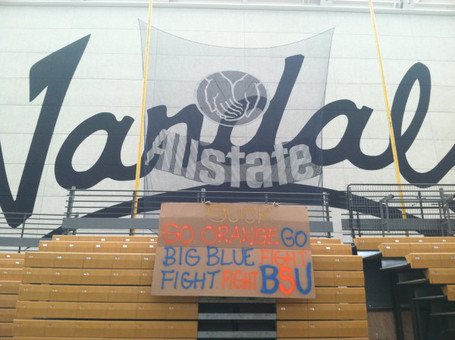 Even better, this made Mark Schlereth throw up in his mouth a little. Go Broncos!

Plenty of Nick Patti news for everyone to have a little

The Internet is thick with Nick Patti stories as he continues to impress at the Malibu Elite 11 passing camp. ESPN featured Patti on their college football home page yesterday, linking to a glowing review of his quarterback skills. Yahoo ran a piece on Patti's eternal love of all things Boise State, including shoulder chips.

The only thing missing is a trick shot video. Intern, grab my Flip cam!

Doug Martin was No. 56, and Nate Potter and Kellen Moore are still to come. So 4 percent of the nation's best college football players are in Boise. Not bad.

ESPN announcer pairings are here. Are you ready for some Brad Nessler?

In addition, there has been a Dan Hawkins sighting.

He will need all the world's Zen books for that assignment.

Georgia coach Mark Richt says in 10 years he hasn't seen a team play has hard as Boise State and "we could learn a lot from them."less than a minute ago via web

Oklahoma, Texas A&M rumored to be exploring their options in the wake of Texas turning the Big XII into a monopoly