Boise State schedule preview: The New Mexico Lobos and a shot at mediocrity

Share All sharing options for: Boise State schedule preview: The New Mexico Lobos and a shot at mediocrity

Nothing says perseverance like starting out the 2010 college football season with a 72-0 whooping by the Oregon Ducks and an eight-game losing streak. The New Mexico Lobos are perseverance. The Lobos came back from one of the most debilitating starts in recent memory and beat the Wyoming Cowboys by a field goal on the ninth game of the season. Congratulations. The Lobos then finished the year with three more losses for a 1-11 total.

Such is life for New Mexico football. Join me now after the jump and let's take a look at the past and what the future has in store for the New Mexico Lobos. Spoiler: It's not good things.

Welcome to OBNUG's season preview series where we profile each opponent on Boise State's 2011 schedule and find them lacking in one or multiple areas. This is one about the New Mexico Lobos. They had one win in 2010.

What we learned from New Mexico's 2010 season

Well...there sure is a lot of room for improvement. Nowhere to go but up, right? Every cloud has a silver lining. Two in the hand beats two in the bush. If you can't beat 'em, join 'em. A dream is a wish your heart makes.

The New Mexico Lobos were among college football's worst in 2010. The Lobos went 1-11, with their only victory coming by three points over the Wyoming Cowboys. We learned that the Lobos have no fear of giving up nearly 100 points, as Oregon showed when they hung 72 before pulling high strings of offense and defense. We learned that head coach Mike Locksley isn't afraid to reprimand his assistants if he so deems it necessary.

All joking aside, what we learned from the Lobos 2010 season is that there is room for growth. Everyone has bad years, albeit 1-11 is really bad, but everyone has to start somewhere. Peter Parker wasn't always awesome and able to swing around town catching bad guys and kissing blondes while suspended upside down from his own webbing. Even Spiderman had to start somewhere before becoming great, and the Lobos are having to do the exact same thing. Hailed as one of the best recruiting classes in recent memory, Locksley and the Lobos (can ESPN please do a documentary with that title? And pay me royalties for the idea. Thanks.) have promise in their future as they continue to progress toward mediocrity.

The only highlights I could find were of the basketball team, so please enjoy the 72-0 drubbing by Oregon in Autzen

With plenty of returning starters, a great recruiting class, and a head coach with tons of experience, the Lobos have great potential ahead of them in the future. And for the sake of Boise State and the Mountain West, please win more than one game this year.

Consensus: It could be worse, but only if New Mexico was Memphis.

How excited New Mexico fans are for 2011 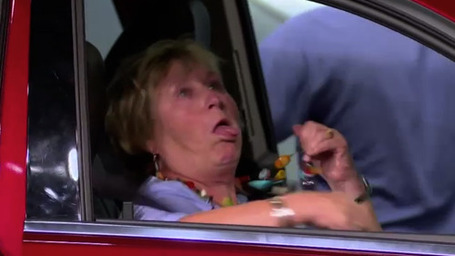 I have a close friend who lives in Albuquerque who is a big Lobos fan. A recent text conversation I had with him pretty much sums up the way New Mexico fans feel about the road ahead.

My Friend: Good article (in reference to my Wyoming preview).

Me: Thanks dude. I have another one on New Mexico tomorrow.

My Friend: I don't know that I want to read that one.

My Friend: Great! Why don't you write that they can the coach. And how can someone with his track record continue to have a job!

So...yeah...I think overall, fans still support the program, the athletes, the school and recruits, but the general distaste for Coach Locksley is extremely apparent. If ever there was a coach on a hot seat, Mike Locksley may be it. Hopefully he can pull out a few solid wins this year and renew some confidence and faith in himself and the New Mexico program.

The Debate: Can New Mexico recover from 2010?

Hmm ... I guess it depends who you ask. It also depends on how far into the future we are talking about. The real debate here is whether New Mexico can come back from an atrocious showing in 2010, and send a message in 2011. Leadership is an intangible benefit on any team, and with enough returning talent, the Lobos should have plenty to go around. Returning players on both sides of the ball should give the Lobos a fighting chance at greatly increasing their amount of wins in 2011.

However, if 1-11 really is all that bad, then the Baja Men have got to know how the Lobos feel.

The millennial hit, "Who Let The Dog's Out" has GOT to be the music video/song equivalent of a 1-11 season.

At 6'6", 215lbs, Lucas Reed is a beast. He averaged 14 yards per catch last year, and was the team's leading scorer, pulling in nearly 500 yards of offense. I'm pretty sure Titus Young did that in one game. Just sayin'. Look for Reed to be the go-to target and most dangerous deep threat the Lobos have. With two of the top four receivers back, and some running backs with good hands, the passing game should be a viable option for New Mexico as they take on the defenses of the Mountain West.

The New Mexico Lobos Offense summed up in a color

Manila (as in the envelope)

When I asked my wife for the worst color she could possibly think of, manila was the clear cut winner in her mind. Her words:

It's boring. It's not even a real color. Nobody likes it because it's not exciting at all. That's why it's the color of envelopes. It's lame.

Manila may not be an exciting color, and the Lobos offense may also not be very exciting; but with returning talent at nearly every position, the Lobos may be moving up the ranks of lame colors in the very near future.

The New Mexico Lobos Defense summed up in a sandwich

Why would I dare dog the infamous sandwich that has contributed to obesity for people worldwide? Let me explain. Every time I go to McDonalds, I get the Double Quarter Pounder. Every time I get it, I'm disappointed. It's not that it isn't good, because it is. It's the fact that it is so underwhelming. With all that meat, cheese, pickles, and other goodies, the DQP has the potential to be great, yet always falls short of the mark.

The 49th Heisman Trophy award was given to Running Back Mike Rozier of Nebraska. Apparently December 3rd is a pretty underwhelming day, as that was the only football relevant information I could find. Perhaps we should dub December 3rd as National Double Quarter Pounder with Cheese day. Okay maybe not.

Hey, that's three times the amount of wins they had last year! Super duper! The Lobos pulled a cookie and scheduled a cupcake for their first home game of the season. Colorado State should be an easy victory before heading to play at Arkansas during the second week of the season. The road from there doesn't get any easier with games at Nevada, TCU, SDSU, and Boise State. Home games will be played against Texas Tech and Air Force. If the Lobos can get a few quick wins under the belt, the momentum should be enough to carry them on to a few more victories against the mid-level Mountain West teams. Here is a detailed chart of the home and away games for the Lobos in 2011. 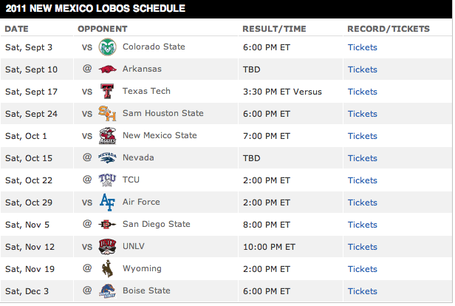 I am a firm believer that life is not made out of the circumstances you encounter, but rather, how you respond to them. Last year, after a devastating loss at Nevada, Boise State could have given up. But they didn't. They responded to their circumstance and became the driver, not the passenger.

I believe New Mexico can do the same thing. 2010 was bad for the Lobos. Really bad. But there are a lot worse things in life than losing a few lot of football games. Migraines, for example, are a terrible thing. I wouldn't wish them on anyone.

But seriously, the Lobos have what it takes to turn their program around. They are still recruiting well, despite their records year in and year out. They have returning talent each year, and despite what a close friend of mine says, they have a coach with two decades of experience. It is my true hope that they can continue to build, brick by brick, on the foundation of greatness. It is not an overnight experience, unless your name is Cam Newton. Greatness is achieved, and New Mexico has just as good a shot as any.

Glass Half-Full Prediction: the Lobos win three of their first five (Colorado State, Sam Houston State, New Mexico State) and take down a few other struggling MW teams in UNLV and Wyoming. With a little luck and a lot of hard work, they may be able to get to .500.

Glass Half-Empty Prediction: they drop their first game at home to cupcake Colorado State and it's the snowball effect from there. I think the Lobos need a few quick wins, otherwise the smell of 0 wins will get closer and closer.

Is New Mexico really as bad as the Orlando Sentinel, Sporting News, Pre-Snap Read, Athlon Sports, and myself make them out to be? What are your half empty and half full predictions for 2011? Hit it up in the comments!