It's Wednesday. It's summer. It's hot. Stay cool, friends. 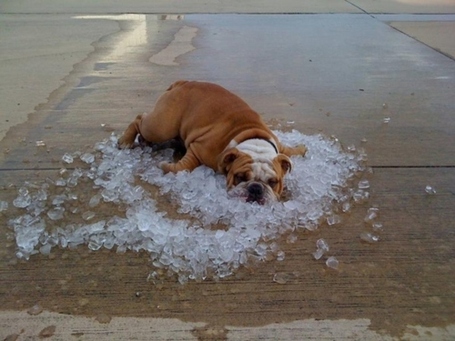 Patti has been one of the top performers at the camp for top performers. He's no Tanner Mangum, but Batman's no Superman either and he does alright for himself. From a man on the scene:

The smallest prospect at the event, Patti looked to have the biggest arm on Tuesday. When other quarterbacks were laboring late in the day to sniff the target on the deep ball in the accuracy competition, Patti was effortless in his attempts.

Kellen Moore is in Malibu to coach at the event, and people can't help but compare Moore to Patti ...  because they're both short. People can be cruel.

(via: Spay and Neuter)

You can tell a lot about a team by what players they bring as representatives to media previews. Boise State chose a Heisman candidate quarterback and a future NFL safety. New Mexico and UNLV went with tight ends.

So maybe we're making too big a deal out of this Boise State - Georgia game?

It's only our entire lives that are on the line! Georgia fan does not feel the same.

... if I put up a poll question here asking fans to rank the games on the Red and Black's 2011 slate in order of importance, there's no doubt in my mind that fans would rather beat a seven-win Florida Gators outfit than a twelve-win Boise State club.

Technically it's called the Allstate AFCA Good Works Team, but the spirit's the same. Potter spent spring break doing mission work, and he volunteers at the hospital. I spent the last month watching Firefly on Netflix.