Boise State schedule preview: The Wyoming Cowboys and the road to .500

Share All sharing options for: Boise State schedule preview: The Wyoming Cowboys and the road to .500

The Cowboys aren't picked by many any to have much of a chance at all in the Mountain West this year. In fact, I would say they are about as likely to be above .500 in the Mountain West as the Idaho Vandals are to be above .500 in the WAC. And by that comparison, I mean no chance at all. Join me now after the jump as we take a look back at 2010, forward to 2011, and the probability of the Cowboys filling some gaping holes on both sides of the ball.

Welcome to OBNUG's season preview series where we profile each opponent on Boise State's 2011 schedule and find them lacking in one or multiple areas. This one is about the Wyoming Cowboys. They are far from mediocre.

What we learned from Wyoming's 2010 season

Former Mizzou offensive coordinator Dave Christensen led the Cowboys to a 7-6 season his first year as head coach. Unfortunately for the Cowboys, that was 2009. His second year, they kicked dirt at .500 and decided to have a six game skid, winding up with only three total wins. 2011 will be the third year of Coach Christensen, and although his optimism is Jedi-esque, there are some big problems to fix this year. Most importantly, why would anyone think it's okay to use our football field as a tumbling platform?

Note: the tumbling in question occurs at approximately 1:15 in...

Okay but seriously...that front flip was awesome, right? Yeah, best part of the game by far. With the departure of stud slightly above average quarterback, Austyn Carta-Samuels to Vanderbilt, err, some Junior College, the race will likely come down to a couple freshman. Unfortunately for Wyoming, neither of those freshman is Kellen Moore or has any Moore lineage in their family.

However, light at the end of the tunnel may come down to the running game, where returning back Alvester Alexander returns after a 792 yard/14 touchdown season in 2010. And if the Cowboys can get enough time to pass the ball, spring-game standout Robert "You've Never Heard of Me" Herron could end up being the likely target. The Cowboys lost both of their top receivers in the off-season to the real world and nothing that has to do with the NFL, but hey, they're still not New Mexico, right?

Consensus: Someone should text Dave Christensen and tell him big numbers are bad on this scoreboard.

How excited Wyoming fans are for 2011 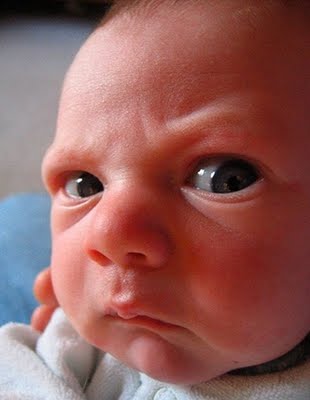 Does this baby look excited to you? Yeah. Thought so. He looks about as excited as someone that just had an Expelliarmus spell cast on them. Not. Good.

It's time to save face, Wyoming. Dave Christensen may have been a one hit wonder in his first year (that is if you consider 7-6 a hit), but it's time make a move. Wyoming needs a spark. The Cowboys are coming off an atrocious season, and an even worse off-season, losing the few playmakers they had on their squad. The real debate here should be if anyone will be doing any tumbling this year on November 26th. My money is on no, especially after the reaming Pettis got last year after his sweet little celebration.

Football won't be the only game that the Wyoming Cowboys will be playing in 2011. Musical chairs will also be a focus for the Pokes. Although they return a solid amount of starters, it is the position roles that need to be filled, so look for some shuffling and guys to step up and into different roles. SS Shamiel Gary was poised to be the leading tackler, and after Freshman All American honors in 2009, it seemed he was destined for greatness as he crept towards his senior year. Unfortunately, after a death in the family, Gary will not be returning to play college football (Ed. note: Gary has not quit football but instead transferred to Oklahoma State to be closer to his family. HT: The Road). Our condolences to him and his family.

With these losses and other gaps to fill, the door is wide open for DE Josh Beizuns to have a break out year. Biezuns is a versatile player, and for the third consecutive year, he will be switching positions. In 2010 Biezuns played outside linebacker, and will be switching to defensive end in 2011. The Cowboys as a whole will be switching their scheme, moving from a 3-4 to a 4-3, likely in an effort to slow down the muscle hamster that is Doug Martin.

Biezuns recorded 61 total tackles in 2010; including 40 solo, 21 assists and 6.5 sacks. Those are some good numbers, especially if your name isn't Shea McClellin.

The Wyoming Cowboys offense summed up in a color

Eiffel 65 said it best: blue. The Wyoming Cowboys are blue. Blue like singin' the blues on the front porch with a banjo type of blues. With the loss of key receivers and a quarterback, the Wyoming offense is poised to be subpar, and probably not see the endzone very often. Freshman quarterback Brett Smith made a splash in spring ball. And if he plays anything like he did in high school, the Cowboys offense may have light at the end of the tunnel in the future.

The Wyoming Cowboys defense summed up in a sandwhich

You're probably sitting there thinking, "au jus? I love au jus! The Wyoming defense must be amazing!"

Well, Mr. Enthusiastic, why don't you let the beefy delight sit in the delectable au jus for too long and tell me how amazing it is now. Au jus is dangerous. It's delicious, but if you let it sit and soak for too long, you may as well just be having french onion soup.

That's exactly how the Cowboys defense is. Glimpses of greatness, but be careful or it could get soggy real quick. The defensive line will likely be the anchor of the team. However, starters return from the entire scheme; DE Josh Biezuns, CB Tashaun Gipson, LB Brian Hendricks, and DE Gabe Knapton. With that much returning talent and leadership, the Cowboys defense will undoubtedly have promise ahead on the road to a Mountain West Conference championship title. Just kidding. But seriously, they aren't that bad.

Boise State vs. Wyoming, November 26th - This day in history

Do I even really want to recall this day from 2010? It was the saddest Three Stars article I had ever written. November 26th, 2010 was the day the win streak was snapped, and any hopes of reaching a BCS game was shattered. On the upswing though, we smashed Utah wich was an Eiffel 65 of consolation prizes. Kind of a one hit wonder.

The loss to Nevada on November 26th, 2010 was heart breaking. If that was to happen again this year, I would definitely refuse to write that Three Stars article. Sorry, Kevan.

Projected record for Wyoming when the Cowboys face Boise State

The Cowboys first two games of the season are at home vs. Weber State and Texas State. Talk about a cupcake scheduling a cookie. Or, is it the other way around? Regardless, the Cowboys should walk away with the W in both their first two match ups. The schedule gets a little bit more difficult after that with games at Bowling Green, Utah State, San Diego State, and Air Force and with home games against Nebraska, UNLV, and TCU. They finish off that stretch with New Mexico at home before traveling to Boise State. So in a nutshell, the Cowboys will likely be 3-7 by the time they show up in Bronco Stadium. That's the best case scenario. Worst case: they are 1-9, with their single victory coming from the only team worse than them in the Mountain West, the New Mexico Lobos. 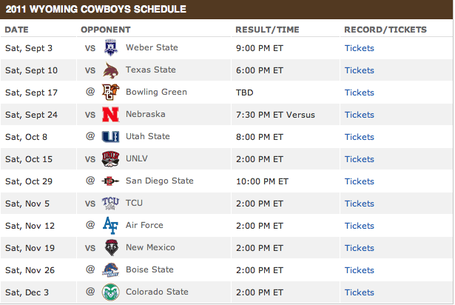 The Wyoming Cowboys will by no stretch of the imagination give the upper tier of Mountain West teams any struggle whatsoever. A 3-9 finish in 2010 likely says as bad or worse when you factor in the offseason losses for 2011. However, despite the tragic losses, I can't seem to completely disregard them...

Maybe it is Coach Dave Christensen. Coach Pete Jr.? Just kidding; I know that was complete blasphemy. But seriously, Christensen seems like he knows what's going on, and with the returning numbers on defense, and some good recruits on offense, the Cowboys could likely have a bright future in the MWC.

Glass Half-Full prediction: the Cowboys take down the top echelon of Mountain West teams in  Air Force, TCU, and SDSU and lose a close battle at home to the Corn Huskers.

Glass Half-Empty prediction: the Cowboys lose their opening games at home to the cupcakes that are Weber State and Texas State which makes for an even longer conference skid before they land in B-Town.

Anyone else have a more lopsided prediction than the above?  Am I the only one with slight confidence in Coach Dave Christensen. Does anyone actually think this schedule poster is cool? Sound off!