The Aztecs are picked by many to challenge Boise State, TCU, and Air Force at the top of the Mountain West, which is cute considering that people actually give teams a chance against Boise State and TCU. Still, SDSU has reasons to hope with returning studs like QB Ryan Lindley and RB Ronnie HIllman. They also have reasons to worry, like how to replace a head coach and two prolific receivers. Is San Diego State a one-hit wonder on the way back to MWC purgatory? Or is this team for real? Hit the jump to find out.

Welcome to OBNUG's season preview series where we profile each opponent on Boise State's 2011 schedule and find them lacking in one or multiple areas. This one is about the San Diego State Aztecs. They return no Brady Hokes.

What we learned from San Diego State's 2010 season

The San Diego State football program experienced Ye Olde renaissance last year under new coach Brady Hoke. They won eight games, including a 35-14 win over Navy in the P-Bowl. They lost four games, but none by more than five points. They had the Mountain West's Freshman of the Year in RB Ronnie Hillman, two record-setting receivers in DeMarco Sampson and Vincent Brown, and a Dick Tomey look-a-like-contest winner Rocky Long. This team was loaded. 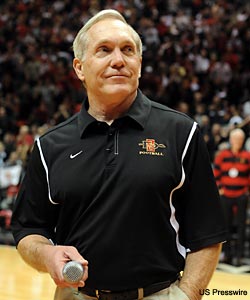 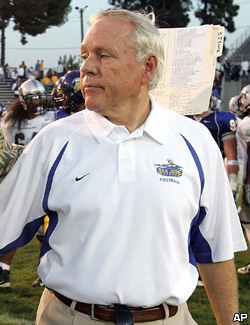 Better to quit while you're ahead, I guess. Hoke left for Michigan this offseason. Sampson and Brown graduated. Long was named head coach and promptly went off on a rant about how blue turf is unfair.  And San Diego State is left trying to build off of last year's success with new people in new roles. But hey, that commemorative DVD sure will be fun.

Consensus: San Diego State is either one of the best non-BCS teams in the country or simply an above-average non-BCS team. So ... Poinsettia Bowl again?

How excited San Diego State fans are for 2011 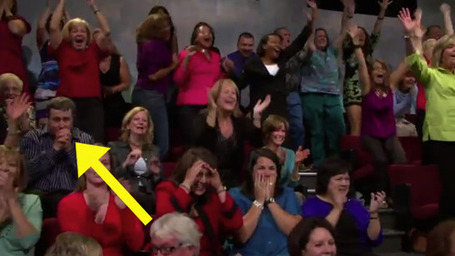 So excited that they just can't hide it.

The debate: Will San Diego State be a one-hit wonder?

Not a chance! This team is the real deal.

San Diego State has what few resurgent teams have: returning quarterbacks and running backs. You are on crazy pills if you expect this team to take a step back with QB Ryan Lindley and RB Ronnie HIllman returning.  Plus, it's not like Brady Hoke's departure left the team in the lurch with an unproven coach. Rocky Long spent 13 years coaching up New Mexico. He knows how to stay out of the way when the situation calls for it, and the situation probably calls for it. People are back on board with SDSU football, and so long as they keep producing talented skill players and keep Long around, it will remain that way.

Probably! They are San Diego State, after all.

There is a history of teams regressing when up-and-coming coaches take off for bigger and better places. Brady Hoke seems like an appropriate example. Remember what happened when he left Ball State? Of course you don't, because Ball State returned to being terrible and no one cared about them anymore. What's to keep San Diego State from falling into the same shame hole? Rocky Long is essentially a defensive version of Hal Mumme. That is not something you want. And when Ryan Lindley graduates after this season, what's to keep the bottom from falling out? This team had a chance to be special last year, and they may have hit their Lindley-Hillman ceiling already. With Nevada and Fresno joining the MWC in 2012, the Aztecs could find themselves struggling to keep up.

Hillman ran for 1,532 yards and 17 touchdowns on his way to MWC Freshman of the Year honors last year. He is your prototypical scatback at 5'10", 175 pounds, except he plays like a bruiser. Imagine Doug Martin trapped in Jeremy Avery's body. His breakout game came against Missouri when Hillman ran for 228 yards and almost single-handedly pulled the upset over the Tigers. And Boise State gets to see three more years of this guy? Ugh.

San Diego State's offense summed up in a color

The Aztec offense entered the offseason answering a lot of the same questions.that the Bronco offense did. Who is going to catch the ball now that our two best receivers are gone? A new offensive coordinar, what's up with that? Can you love a running back too much?

For the most part, people expect the Aztec O to be all right. Lindley is the conference's second-best quarterback and a shoo-in for a high NFL draft spot next spring. Hillman will gain another 1,000 yards and make it look easy behind a line that returns four starters. Someone will catch the football occasionally. Someone will call plays that Lindley will audible out of. It'll work. Don't be surprised if the Aztecs don't equal their 35 points-per-game output of 2010, but anything close should be good enough.

San Diego State's defense summed up in a sandwich

The Aztecs run a 3-3-5 defense, thanks to some Grateful-Dead-induced vision Rocky Long had in the 70s. At least SDSU is pretty good at it. LB Miles Burris certainly has flourished, leading the conference in sacks and wreaking havoc from all over the field. The Aztecs are solid, too, at corner with Leon McFadden and nose tackle with Jerome Long. Apart from those guys, SDSU has some work to do. Three of the five DBs need replacing, and both defensive end spots will have new faces.

The Broncos head to sunny San Diego to take on the Aztecs on November 19, 2011. For historical perspective and superstitious calendar karma, I turn it to Boise State historian Tom Scott Slant.

In a winner-take-all game for the Big Sky championship, Boise State and Idaho face off before a record crowd at Bronco Stadium. BSU jumps out to a 13-0 lead behind Tony Hilde and Ryan Ikebe - then hangs on to beat the Vandals 27-24, ending Idaho's amazing 12-game winning streak in the rivalry. It capped off a 10-1 regular season under Pokey Allen and gave the Broncos their first league title since 1980.

The Aztec season will be defined by the three-game stretch of Michigan, TCU, and Air Force. No pressure or anything, but doing well in those games means the difference between a 10-win year with parades in the street and an 8-win year with San Diegans forgetting about you and longing for the Padres. The Padres! Can you imagine?

Before that stretch, SDSU is golden with a non-conference sched of Cal Poly, Army, and Washington State. And after that stretch, they get the soft MWC underbelly of Wyoming, New Mexico, and Colorado State. Depending on how the Mighican-TCU-Air Force stretch pans out, the Broncos could either be visiting the top team in the Mountain West or the top team in the greater San Diego area and not much farther. Either way, at least BSU will know well in advance which one it will be. 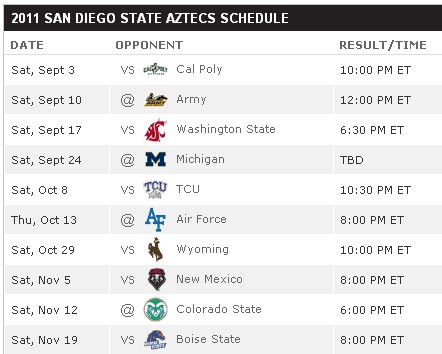 San Diego State has the look of a blackhorse Mountain West challenger. They are stocked at quarterback and wide receiver, and they have enough solid players to cover for the new ones. Rocky Long seems to know what he's doing. And yet ...

Something about this team just seems off. All the preview magazines have SDSU's best-case scenario as a third-place finish in the conference ahead of Air Force. But not many people even expect that. Maybe it's Rocky Long. Maybe it's the new receivers. But for whatever reason, San Diego State has the feel of a good team that is one or two pieces away from being great.

Glass-half-full prediction: The Aztecs go 2-1 against the Michigan-TCU-Air Force trifecta, slip into third place in the conference, and get to 10 wins

Glass-half-empty prediction: San Diego State loses to all three of the Mountain West's top teams, drop a few in non-conference, and find themselves on the verge of missing a bowl

What do you make of San Diego State's chances in 2011? Does their game with the Broncos keep you up at night? Did Dick Tomey repurpose Rocky Long's body for himself? Share your thoughts in the comments.