52 weeks in a year. 52 cards in a deck. 52 days till kickoff. This is all significant somehow.

Yes, we've got 52 days until kickoff...but that particular number has yet to be claimed on the roster, so today I'll highlight a random, numberless soul. Survey says—Corey Bell

It's always nice when you can snag good players right in your own backyard, and Boise State did just that going after Bell. A two-way player for the Capital Eagles, Bell finished his senior season as a first-team all-state selection and was named SIC player of the year after recording 44 tackles (12 for loss), 3 sacks, and 3 INTs on defense and accounting for 1,204 yards of offense and 25 TDs on offense. In Bell's junior campaign, he had 50 tackles (9 for loss), 3 INTs and 2 forced fumbles. As is often the case with Bronco recruits, Bell also got things done in the classroom during his time at Capital, and was named to the Academic All-Conference on 3 separate occasions. As far as I know, Boise State extended Bell his only scholarship offer.

"For Whom the Bell Tolls"

This one's a little wordy, but well worth the effort. Plus, the PA could play that Metallica song when he makes a tackle!

Bell is the only 2011 commit that I had the benefit of watching in-person, so I feel I have a little bit better grasp on what he brings to the table. Bell is being brought in to play nickel, a position that has become an integral part of the Bronco defense. Currently, the Broncos have at least $.15 in nickels with senior Hunter White, junior transfer Dextrell Simmons, and Jonathan Brown—although I'd be hard-pressed to give the pecking order just yet. The depth at the position, and the closeness of the competition leads me to believe that we're well enough stocked to not require Bell to burn a redshirt year. Frankly, judging by the fact that he hasn't been assigned a number yet, he may even be in line to take a grayshirt.

Bell should ultimately be a boon to the Bronco D and will make an immediate impact on special teams when what ever color shirts he'll be wearing are up. From watching him live, I can tell you he stands out on the field because of his high motor, in short: the kid flies around—a very desirable trait in a nickel. White graduates after this season and Simmons, you would figure, will have 3 years to play 2, but I say he'll play this year. Brown is a definite x-factor and played well in limited action last season. I'd say Bell should be ripe for at least the redshirt which would keep 3 nickels in the rotation in 2012. If the Broncos are lucky enough to land Chris Santini for next year's class, the cupboard should be well-stocked at the position for quite a while.

To commemorate National Letter of Intent day, Bell went out and got a Mike Tyson-esque Bronco face tattoo. 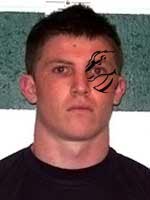