The Broncos' game against TCU may figure to be Boise State's closest game in the 2011 season. What is the status of the Horned Frogs in the post Andy Dalton era?  What makes this TCU team so tough? Can someone get Gary Patterson a belt, for crying out loud? Let's find out.

Welcome to OBNUG's season preview series where we profile each opponent on Boise State's 2011 schedule and find them lacking in one or multiple areas. This one is about the TCU Horned Frogs. Their best player has an armband fetish.

What we learned from TCU's 2010 season

Coach Gary "Pants Action" Patterson led a veteran ball club to an undefeated season with polished QB Andy Dalton (2nd round draft pick, 35th overall selection of the Cincinnati Bengals) at the helm. Dalton, who accounted for over 10,300 passing yards also netted just over 1,600 career rushing yards in Coach Patterson's balance of the spread offense.  Dalton will be missed the most of all the departing starters. He was a quarterback who made solid decisions, had a strong arm, rarely missed his receivers, and was much faster than he appeared.

Defensively, the Horned Frogs had a solid year in 2010 only yielding an average of 12.0 points per game. The defense was led by the solid line backing corps of Tank Carder and Tanner Brock.

What makes Gary Patterson so good?

I don't really know. Considering he rarely can talk with a normal tone of voice, wears a goofy golf visor, and is one of the only people I know who can adjust his pants six times during a four-second camera shot, he coaches one of the best programs in the country.  Year in and year out he finds talent and turns it into.... well.... better talent. Coach Patterson has been known over the course of his 11+ years in Ft. Worth as always having a strong defense, and this coming year is no different. 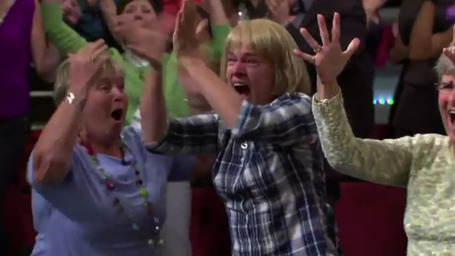 The debate: What should we expect from TCU in 2011?

A quarterback who will experience some growing pains. Casey Pachall (6-4, 208 lbs) looks to be the favorite coming out of spring camp this year as the signal caller.  I don't care what the most optimistic reports are... he will struggle. Maybe not as in the way Chris Farley struggled to get into a little coat, but still.

Pachall will probably struggle the way that any new quarterback would when stepping into the starting role of a major player in the college football realm. Hey, as long as he doesn't perform the way Jake Locker would and overthrow his receivers by 25 yards, Pachall will be fine.  TCU also has to find 3 more starters at offensive line.  This could be the key to TCU's passing of the torch because they certainly have the skilled players (minus the QB of course) to hurt opposing teams. The return of the running back duo of Ed Wesley and Matthew Tucker will give opposing teams fits this coming season. The duo combined for a touch over 1,700 rushing yards during the 2010 season. The wide receiving corps returns sophomore Josh Boyce and junior Antoine Hicks, one of the most under-utilized men in the conference. Hicks has speed, strength, hands, and experience. His stats are deceiving, but his play isn't. He is a gamer. Look for his stats to increase dramatically despite breaking in a young quarterback.

On the defensive side of things, the Horned Frogs must fill voids in the secondary and along the defensive line. The Frogs need three defensive linemen to step up and need a safety and a cornerback. I think they have a few decent linebackers.....yep, they do. Tank Carder and Tanner Brock are the backbone of this defense. It is players like them that allow Gary Patterson to run his 4-2-5 defense and not have to make any adjustments against bigger teams such as Wisconsin. Rarely will a team possess a linebacker of their abilities, not to mention two of them. This is how much I respect Carder and Brock - of all the line backers in college football, these are the only two that can take on Doug Martin themselves. Yep, I said it, Doug Martin is human, he can be stopped, but he will get his yards. This is what makes Gary Patterson good, he has two stars on defense, a few starters, and some big holes to fill.... and he will fill them, and he will fill them with exceptional talent.  Expect a fast, physical, well-coached team when we meet them in November.

TCU vs. Boise State, November 12 - This day in history

Minnesota's Harmon Killebrew, the proud product of Payette, is named the American League's MVP after a season that saw him lead the AL with 49 home runs and 140 runs batted in. Killebrew led the Twins to the American League West title in the first year of divisional play in Major League Baseball. He would play six more seasons, ending up with 573 home runs and a place in the Baseball Hall of Fame in 1984.

Win one for The Killer!

8-1 with an overtime loss on the road to San Diego State.  This will be a result of inconsistent play on the road by Pachall and will be a good learning experience for him. TCU will have blown out New Mexico, Wyoming, Portland State, and U-L Monroe, and will have handled  BYU, Air Force, Baylor, and will squeak one out against SMU. TCU will then sleepwalk against UNLV and Colorado State (after the Bronco game). They will win their bowl game and then go give some legitimacy to the Big East. 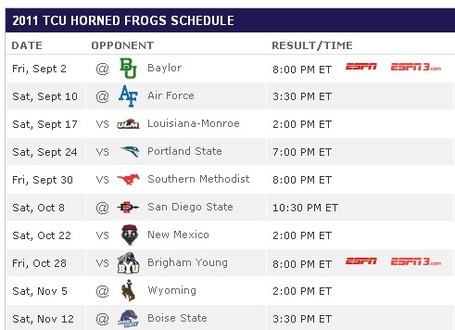 But we know by now that all eyes will be on Bronco Stadium on November 12, and Bronco fans are accustomed to seeing this matchup.  The most recent game saw Boise State as the victor as their defensive game plan gave Coach Patterson nightmares from January 2010 - September 2010.  Pants Action, Andy Dalton, and the rest of the crew could not figure out why Boise State's best cornerback was lined up as free safety all night. Nor could they solve our numerous defensive line schemes, rotating among 2, 3, 4, and 5 man alignments all night.

Paired up two evenly matched teams with undefeated Boise State and two-loss TCU who lost on a last second field goal to Utah and to eventual contender in the NC game in Oklahoma. It was a long hard game in which Boise State couldn't really find its pace. Which probably had a lot to do with the strength of the TCU defense. TCU's offense was fast and consistent, especially with the speed option to the short side of the field. Boise State fought hard despite a defensive line depleted with injuries, a wide receiving corps that did not possess the ability to burn any defensive backs, a running game that was inconsistent for a variety of reasons, and being unable to capitalize on big plays.

Featured a game before I was a beloved member of the Bronco Nation. A game played in the Ft. Worth Bowl featured two teams with nearly identical records and evenly matched. It was a back and forth game that was won by a Ryan Dinwiddie completed touchdown pass to future NFL tight end Derek Schouman.

This will come as a shock.... Kellen Moore. What is not to like about the way Kellen Moore manages the game, reads defenses and makes solid decisions? Our defense will have a big day confusing Pachall into throwing two interceptions. Look for our coaching staff to return to the multiple defensive line alignments to confuse Pachall.  Also, a small factor in our game plan will be to have one of the following coaches drawing up our defensive game plan: 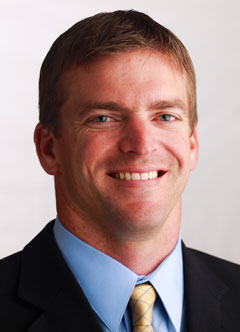 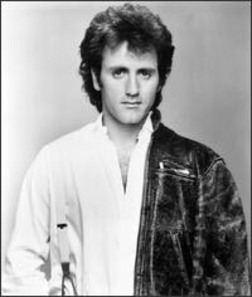 Boise State's offence will be firing on all cylinders.  Boise State will return an interception for 6 and get one touchdown off of a trick play making the difference in an otherwise close match up.

Am I too critical of the young Casey Pachall? Should I not make fun of Gary Patterson's need for a belt AND suspenders? Leave your comments below.