Chris Petersen: A history of risk-taking

Share All sharing options for: Chris Petersen: A history of risk-taking

Earlier this week, blogging compatriot Jeremy Mauss of Mountain West Connection wrote an article about the omniscient perfection of the greatest college football coach of all-time, Chris Petersen. At least, that's the conclusion I drew from the article, and I scored a 700 in reading comprehension on my SAT.

Risk history after the jump. Let me know what you'd add to the list in the comments.

The modus operandi for teams trailing by a touchdown in the final seconds of a football game is to wing the ball wildly downfield in hopes of a fluky busted coverage or a handsy corner being called for pass interference. That is football status quo. Trying something different makes you a weirdo, and people write blogs about you. Trying something different three times on the three most important plays of the game makes you a crazy person ... unless the plays work out. Then you're a god.

Result: I am naming my first child Chrisp in honor of Coach Pete.

Back in 2008, there was really no way of knowing how incredible Kellen Moore was going to be. Moore was in a QB battle with Bush Hamdan and Nick Lomax, and it was pretty close. Even I was getting mentally prepared for a season of Hamdan.

The fact that the competition was not a runaway made the decision all the harder for Coach Pete. Go with a senior QB (Hamdan) who would get the job done smoothly and efficiently? Or take a chance on a 6-foot lefty (Moore) who will either be the greatest thing since sliced bread or the next Bubby Brister? Hmm, that came out kind of sacrilegious. My apologies.

The other Fiesta Bowl 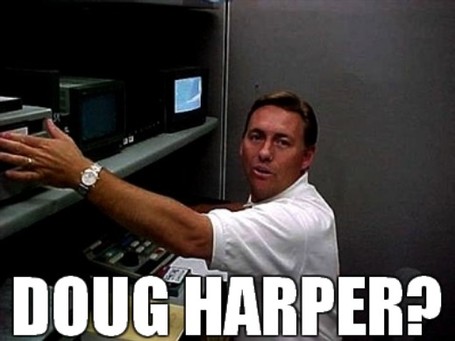 Boise State's fake punt "Riddler" may have been a combination of calls from coach Jeff Choate, safety Jason Robinson, and kicker Kyle Brotzman, but Coach Pete could have easily put the kibosh on any and all risky business in that game. First off, it was close. Second, the Broncos were on their own half of the field. Third, TCU was really good. But without that play, Boise State may not have won, and OBNUGgers would have had a lot less ammo to throw TCU's way.

Saying no to Stanford

Risk Level: Selling all your possessions because you're sure the world will end

You could also replace "Stanford" with basically any BCS school. Coach Pete has turned down a litany of suitors during his time at Boise State, betting on the Bronco bigwigs to keep improving the program and pumping money (that doesn't exist yet, mind you) into the football team and facilities. That is a risky move. I got out of the clickable eraser business as soon as I felt people might stop investing in mechanical pencils. (Shrewd move on my part, by the way.)

What bold moves and risky calls should have made this list? Which of the four moments listed above do you think was the riskiest?