Tomorrow Boise State goes before the NCAA's Committee on Infractions to state its case as to why the charge of lack of institutional control is really the funniest thing they've heard in awhile. Proposed thesis: "Come on, have you seen what Ohio State has been up to?"

Nevertheless, the NCAA is stodgy and legalistic and jonesing for an 1800s-style witch hunt, so who knows how this meeting will go down. After the jump, I propose 13 possible outcomes for the Broncos, ranging from the actual to the asinine. Share your prediction in the comments.

When we may know the outcome of Friday's meetings

The meetings are closed to the public and the media, and Boise State does not plan on talking to anyone after they are through. The NCAA takes its time with cases like these (see: USC's vacated title from 2004), so we may not hear their decision for months. Throw in an appeal process from BSU, and this thing could be another year in the making.

17 possible outcomes for the Broncos

The Broncos actually proposed this option, presumably as a way of avoiding a harsher punishment. Probation simply means that a pencil pusher gets to monitor your every move (to the careerbuilder resume, David Augusto!) and if you mess up again you're in big trouble.

Perhaps when looking at Boise State's crimes in context of hundred-thousand-dollar pay-for-play scandals, the NCAA will have a good laugh and dismiss everyone for an early lunch.

So far, Boise State has reduced football scholarships and football practice time as well as similar scholarship reductions and miscellany for tennis and track. The NCAA could see these sanctions as being quite good enough.

Jim Tressel was due to serve a five-game suspension for his role in Ohio State's lollapalooza. So this seems like as good a place as any to include my new favorite .gif from EDSBS.

This week I participated on a terribly depressing radio segment on Boise's AM 1260 where the host detailed how Gene Bleymaier has a 50/50 chance of being fired over this mess. The reason: Two separate women claim an abusive work environment and that Gene B stifled early signs of NCAA violations. My rebuttal: "But look at the non-conference schedule he put together."

This would make Craig James happy, I believe.

The Broncos are already down three football scholarships and practices for the next two years, so tomorrow's hearing could turn into a high stakes game of Deal or No Deal. 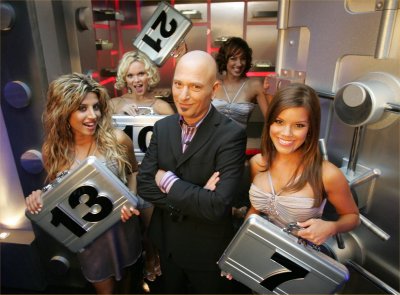 Then who will watch the Fiesta Bowl?

Get ready to meet your new starting quarterback, Brad Elkin!

Boise State has lots of goals that need money, like stadium expansion, so hitting the Broncos in the wallet may be one of the most awful things the NCAA could do.

As delivered by Dustin Lapray. Woe to our humanity!

Typically, the NCAA would make a school disassociate itself from an offending player or booster, but I think we're all clear here that the villain in the Broncos' case is inflatable mattresses.

What is your prediction for Boise State's NCAA investigation hearing? Will the NCAA drop the hammer? Should there be any hammer to drop? Share your thoughts in the comments.