Share All sharing options for: Boise State schedule preview: The Colorado State Rams and the quest for bowl eligibility

Not too long ago, the Colorado State Rams were beating Fresno State in New Mexico Bowls and giving Bronco fans all sorts of happy feelings and Pat Hill ammo. Well, things have changed. The Rams would do just about anything to get to a New Mexico Bowl now, which is both sad and kind of cute. Aw, someone cares about the New Mexico Bowl. That ought to make Poulan Weed Eaters or whoever their sponsor is pretty happy.

Fortunately for them and for BSU's strength of schedule, this season may be CSU's best chance to return to a bowl game, considering their soft schedule and their good QB. The full preview of Colorado State is after the jump. Enjoy.

Welcome to OBNUG's season preview series where we profile each opponent on Boise State's 2011 schedule and find them lacking in one or multiple areas. This one is about the Colorado State Rams. This defense thing is new to them.

What we learned from Colorado State's 2010 season

As they did the year before, the Rams again won three games, beating Mountain West cellar dwellers UNLV and New Mexico and earning OBNUG Team of the Week honors for beating Idaho on a last-second field goal. You hear that, Idaho? The only other teams the Rams beat all year were really, really bad ones. Deal with that.

In many ways, the three-win 2010 season was worse than the three-win 2009 season because in 2009, at least the Rams were close every so often. That was not the case in 2010. The year-in-review tape might as well be a tape of the season finale - a 44-0 loss to archrival Wyoming in which the offense was bad, the defense was worse, and Steve Fairchild blacked out for a quarter-and-a-half. At least, I think that's what happened. I didn't watch the game because I don't have The Mtn. and I had to wash my hair that day.

Consensus: Congratulations! Not the worst team in the country or the Mountain West (barely).

How excited Colorado State fans are for the 2011 season 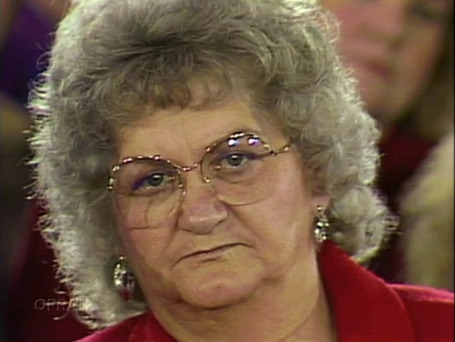 More disappointed than anything, really.

The debate: Colorado State will play in a bowl game

Colorado State's schedule is practically begging the Rams to go to a bowl. Their non-conference slate features Northern Colorado, regular Colorado, San Jose State, Utah State, and UTEP. You should be able to find four wins there, and if you can't, then you're not looking hard enough. If the Rams can go 4-2 out of conference, all they'll need are three wins in conference. That's what UNLV, New Mexico, and Wyoming are for. Considering that the CSU offense should be improved and that only coaches named Mike Locksley can sustain losing for this long, the Rams are due to go bowling. 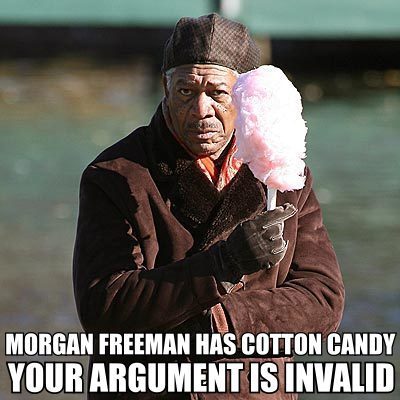 In his true freshman season, Thomas started every game and completed 64.7 percent of his passes, good enough for a school record and a passive-aggressive note of congratulations from Bradlee Van Pelt. Thomas is the real deal, at least that's what Rams fans are hoping. A former four-star recruit, he showed great promise in his freshman campaign and may blossom in Steve Fairchild's pro-style offense if given the right weapons.

Bonus: He's been touched by a Hawkins. 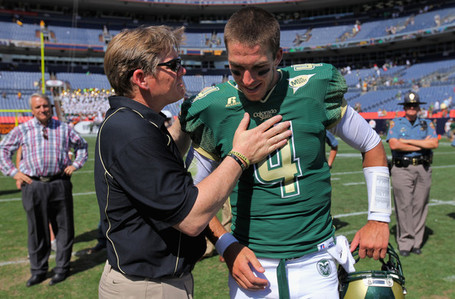 Colorado State's offense summed up in a color

The Rams have a chance to be relatively good on offense this year, thanks to the emergence of Thomas and the return of four offensive line starters. That should bode well, provided the Rams can find people to run the ball and catch the ball and score touchdowns. If they do, watch out, bad MWC defenses. If they don't, never mind, bad MWC defenses. You're off the hook.

At the very least, the Rams will improve on their 16-points-per-game average from last year. How can you not?

Colorado State's defense summed up in a sandwich

Here are the positive things about the Colorado State defense - Mychal Sisson plays linebacker, Mike Orakpo is the younger brother of Washington Redskins DE/LB Brian Orakpo, and that's it. The rest of the Ram D is either unproven at playing defense or bad at playing defense, and the overall unit might not be much better than the 100-plus-ranked defense that took the field last year.

Boise State vs. Colorado State, October 15 - This day in history

Idaho State rallies in the final seconds to upset Boise State, 32-31, at Holt Arena in Pocatello. The Broncos had gone into the game 6-0, and it would be the only blemish on their magical 1994 season until falling to Youngstown State two months later in the Division I-AA national championship game.

That really happened? My, how times have changed.

The Rams could not have asked for a better start to their season, opening with two very winnable games against a D1AA school and a D1A school that would probably win five games in D1AA. Consider those two games to be two wins, and expect the Rams to find at least one more W in the Colorado - Utah State - San Jose State stretch. In theory, CSU could have a 4-1 start to the season. Or they could start 1-4. Never underestimate Steve Fairchild's unpredictability. 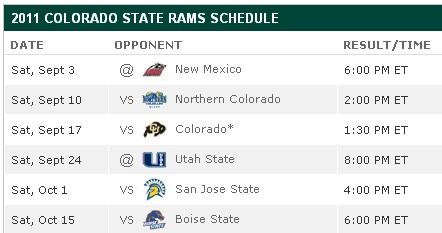 Steve Fairchild's job may very well be on the line if he cannot wring six or seven wins out of this team. The schedule should certainly allow for it, and the play of Pete Thomas will definitely help. But can the Rams make enough plays on defense and find enough playmakers on offense to separate themselves from the bottom of the Mountain West? That was a rhetorical question. No one knows the answer, not even Steve Fairchild.

What are your thoughts on the 2011 Colorado State football team? Do you think they can be bowl eligible? Had you even heard of Pete Thomas before this story? Share your thoughts in the comments.