Well, I've been at it a week and we're almost through with the 90s (yes, I'm aware what year it is). Of course, with the 90s comes a whole lotta defensive lineman, but we don't mind...in fact, the more the merrier scarier. I'm counting down the remaining days till kickoff by highlighting the Bronco with the corresponding jersey number. Sound like fun? It is (for about 10 days).

We've got 92 days until kickoff...so today we'll be taking a look at number 92 on the Bronco roster—Shea McClellin

Don't laugh, but McClellin might be the best all-around athlete on the entire Boise State team. McClellin was a three-sport star at Marsing High School where, as a senior, he rushed for nearly 1,900 yards and 22 TDs, made 126 tackles, six INTs and scored another 7 TDs on defense. Then basketball season rolled around and he averaged nearly 17 points and 12 rebounds per game. Oh yeah, his junior year on the diamond he batted .453, drove in 21 runs and stole 10 bases. The Bronco coaches knew, that despite playing at a small school in Idaho, the kid was a freak athlete who, with a little coaching, could become a big-time player in a short-time. Luckily for us, it appears that only the Bronco coaches felt that way, as they extended McClellin his only scholarship offer. McClellin signed with the Broncos in the '07 class, grayshirted, and joined the Broncos in January of 2008.

The last name screams Scottish, but look at the kid...he looks like he should be swinging an axe and drinking flagons of ale. 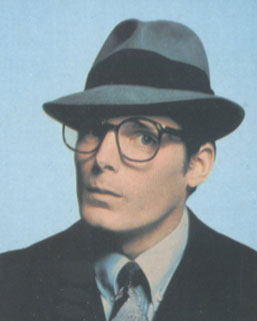 The notoriously shy and soft-spoken McClellin steps into a phone booth before taking the field.

6 tackles and 2.5 sacks against Virginia Tech in 2010. 36-yard pick six against Toledo in 2010. 6 tackles against Bowling Green and Idaho in 2009. Interception against Utah State. Running down shifty RB Robbie Rouse after a 30 yard gain at Fresno (still amazed at that one). Blocked field goal at Oregon and forced 3 fumbles in 2008.

McClellin truly does keep getting better and better and better. His 2008 was promising. His 2009 was a relief (36 tackles, 3 sacks while coming off a nasty leg injury). His 2010 was dominating (9.5 sacks). What will his 2011 be like? I can't wait to find out. In fact, I'm positively giddy about it. I have a confession to make: when the Broncos recruited McClellin out of Marsing High School in 2007 I wasn't that thrilled with the pick-up. I mean...what were they thinking burning a schollie on a 3-sport star in a tiny backwater berg in Idaho? They could've gone after some California kid with double-digit offers...at least roll the dice! I'm glad to say I was completely wrong about McClellin and even more so that I've learned to completely trust our coaches recruiting tactics and philosophy. McClellin hasn't just proved me wrong...he's become one of the most dominant players on the field for the Broncos and in an era of Winns, Winterswyks, Wilsons, and Johnsons (totally screwed up my alliteration, there Jeron) that is saying something. In three years, Shea has notched 80 tackles and 13.5 sacks and he's far from finished.

The Broncos haven't had a defensive lineman taken in the NFL draft since Kimo Von Oelhoffen was drafted by the Bengals in 1994. The last defensive end that was taken was all the way back in 1986 (Markus Koch, 2nd round, Washington). I honestly see McClellin as a second-rounder, but given the NFL's history of overlooking the Bronco D-line, I think he'll probably go on day 2. Nonetheless, I think he has the tools to be a huge impact player at the next level and just maybe he, along with Billy Winn, Tyrone Crawford, and Chase Baker make the 2012 NFL Draft the year of the Bronco D. Oh, and about this year...I say McClellin finishes strong—35-40 tackles and at least 7 sacks on his way to a first-team all-conference appearance.

Proving the old adage that blondes have more fun, McClellin plans on spending his summer floating the lazy river at Roaring Springs and mini-golfing at Wahooz (for "conditioning", obviously).