Just a friendly reminder to renew your domains, everyone 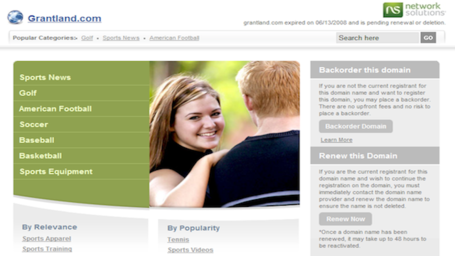 Lesson brought to you by Bill Simmons' new venture, Grantland.com.

The Broncos have five of the eight honorees, TCU has two, and San Diego State has one. You're welcome.

For  those unfamiliar with O'Brien's story, he was Big Sky Defensive Player of the Year on the Broncos' 1994 national runner-up team, he coached at Montana State, and then he was (spoiler alert) arrested on methamphetamine charges and spent two years in federal prison. O'Brien's book, Busted Bronco: From Addiction to Redemption, will be out sometime this summer.

Those Canadians know their hyperbole

In an article about incoming Boise State DB Taylor Loffler, the Province calls the former Canadian high schooler "The Amazing Taylor Loffler," claims he is the greatest footballer to ever come out of the province, spells defense with a "c," and says this about the Broncos:

Loffler is ready to embark on the next stage of his career as a defensive back with the BCS title-contending superpower Boise State University Broncos.