For those of you hoping to know as much as humanly possible about the Toledo football team, you are in luck. Matt Sussman, purveyor of MAC sports at the Hustle Belt blog, is here to perform the mind meld for you.

After the jump, find out Matt's take on Toledo's championship chances, their quarterback situation, and their undying love for Tim Beckman. Take a picture, Toledo fans, it will last longer. Sheesh. 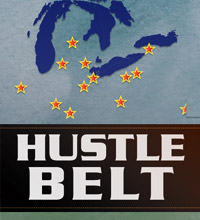 Winning the MAC West would be sufficient, but they can do so much more. If they fall back to 6-6, then something must've gone horribly wrong.

2. Who is the MAC favorite at this point? If it's not Toledo, why not?

We first have to start with division winners Miami and NIU, both of whom are returning many key players(although NIU lost MAC Player of the Year Chad Spann). But Miami, for some reason, I feel overachieved a bunch, so they may come back to earth in 2011. Temple will stay competitive as well thanks to that running game and (finally) a quarterback, but they lost much of their best defenders to the NFL Draft. I can't figure out whether Ohio will be great or have a painful year.

That leaves Toledo as the only favorite whose head coach didn't accept a job somewhere else. So while NIU could be the best team, by virtue of the always-pivotal NIU-Toledo game being in the Glass Bowl this year, the Rockets have the inside track for the MAC West, and thus the conference championship.

3. Who is going to play quarterback for Toledo this year? And by that I mean, how is Eric Page going to get the ball?

Occasionally via the center. Page did have three passing touchdowns last year. But you can't Wildcat your way to a win, as much as I'd love to see that. On the crazy concept that they line him up as a receiver, it's either Austin Dantin or Terrance Owens. You folks in Boise saw both when Dantin was injured, but at this point it's really a toss-up on either, provided they're healthy.

And there may be no wrong answer. Dantin has a year more experience than Owens and runs a bit more, but T.O. did admirably well against Boise, Northern Illinois and would've had the game-winning TD and two-point conversion run in the Little Caesars Bowl had it not been for FIU's stupefying comeback. A gut reaction says Owens gets the nod at starter, but I bet you'll see both all year.

Ridiculously frigid. That chair is so plush right now, having gotten the program back on track in two years. He dismissed two players on defense (including a third team all-conference linebacker) just like that when they were arrested for felonies. I wouldn't be surprised, if they have another good season, when a bigger school hires him away. Even if they have a disappointing amble through the MAC, Rockets athletic director Mike O'Brien has been historically patient with all his coaches.

5. True or false: Toledo will win more than eight games this year.

True, and I could see 10 wins happening. I don't know if a win over Boise is doable - not impossible - but that isn't the nonconference game they're circling. You may want to watch them play at Ohio State and be rather surprised at the outcome.

Want more Toledo information and/or MAC trivia? Hustle Belt is the place for you. Visit any time.