The Boise Ironman Triathlon was last weekend. The Numerical Roster Countdown is kind of like that, except without the swimming, biking, and running.

We've got 81 days until kickoff ... so today we'll be taking a look at number 81 on the Bronco roster—Nick Alexander

Alexander's grandfather is Hall of Famer Carl Eller, so he certainly has the pedigree to be a great football player in his own right. He was a two-year letterman at L.A.'s Crenshaw High where he was an All-City performer at defensive end and offensive tackle. Nick recorded 55 tackles (10 for loss) and nine sacks as a senior and was offered scholarships by Boise State and Washington State.

Who's up for some pillaging?

In High School, recorded 15 pancakes (delicious pancakes, at that) his junior year at OT.

ESPN doesn't know he exists and Broncosports hasn't updated his bio. The only reason I know he's not imaginary is that I saw him at The Cheesecake Factory last week.

For the 2nd straight season, the Broncos D-line is going to be absolutely sick—and I, of course am down with the sickness. The only substantial loss along the vaunted defensive front is DE Ryan Winterswyk who has moved on to lockout limbo. Winterswyk racked up 167 career tackles and 20 sacks in his illustrious career and his leadership and experience will be hard to replace...but I can't help thinking that the D-line will hardly skip a beat in 2011, even with his departure. So, how does Nick Alexander factor into all of this? We're not really sure yet.

2010 definitely wasn't a breakout year for Alexander that some (me, myself...I) thought it would be. Entering Fall Camp last season, I actually thought that Alexander would get equal time with the smaller, quicker Kharyee Marshall. Not so. In fact, neither played quite as much as I thought they would their redshirt freshman seasons...but Marshall definitely logged more minutes and even managed to crack the statbook. This season, with Winterswyk's departure, Alexander has as good a shot as any to crack the rotation. You have to consider McClellin and Crawford the presumptive starters at the ends, and it's probably safe to say that Marshall—who hopefully now weighs at least more than Jimmy Pavel—will be right behind one or the other. Alexander then just needs to beat out walk-on Austin Baker, local product Tyler Horn or true frosh Samuel Ukwuachu. In my mind, the race between Alexander and Horn is on. Horn played quite a bit in the Spring, in part, because of the absence of Marshall and Alexander, and looked good. Horn is coming off a grayshirt, so Alexander has the experience edge, but at 6'4" and 256 lbs. Horn now has the size advantage. I hear tell that Horn also has a bit of a nasty streak in him, but I've yet to see it in person, so let's say there's a "push" in intensity. Frankly, I'd give Horn and Alexander an equal chance of cracking the two-deep this Fall, and think they'll both get a decent amount of minutes in 2011. Caveat: I've been wrong before (outcome of Wrestlemania VI)

It's well documented that one of Nick Alexander's grandfathers—Carl Eller—is in the National Football Hall of Fame. You might not know, however, that his other grandfather—Francis Johnson—is in the Guinness Book of World Records for crafting the world's largest ball of twine. 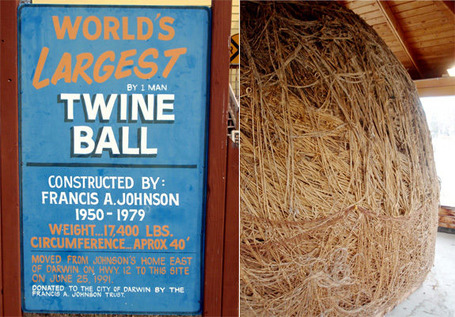 Quite the rich heritage this kid has.