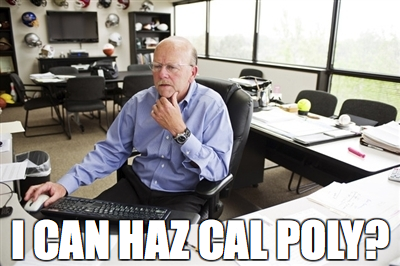 The WAC meetings are underway in Park City where Karl Benson and company are poised to make FBS football quite a bit more diluted.

Seattle is expected to join as a non-football member, and Montana has previously gone on record as being quite content where they are. Boy, remember the good old days when conference expansion was fun and meaningful? Seems like forever ago.

Devan Demas is the next Jeremy Avery

Boise State's latest running back commit was compared to Boise State's former running back starter in a Chadd Cripe blog post yesterday. Coaches see a lot of the same qualities in Demas that they saw in Avery. Including pipe cleaners for legs?

Stat of the day

Boise State has been ranked in the final AP Top 25 almost half (46%) of its entire time in FBS.

It's a trick question. They're all important. /goes back to reciting Coach-Pete-speak