Boise State opens the season less than three months from now at the most biased neutral site you could find and against one of the most intriguing teams of the 2011 college football season. It's just like last year's opener, except people knew what to make of Virginia Tech.

Is Georgia destined for an SEC East title? Depends who you ask. Are the Bulldogs worthy of Top 25 status? Maybe, maybe not. Is that a purse Aaron Murray is carrying? Yes. More answers and more questions are after the jump. Let the opponent previews begin!

Welcome to OBNUG's season preview series where we profile each opponent on Boise State's 2011 schedule and find them lacking in one or multiple areas. This one is about the Georgia Bulldogs. They don't have an offensive line.

What we learned from Georgia's 2010 season

Not all freshmen quarterbacks can be Kellen Moore, so the fact that Georgia dropped four of its first five with green Aaron Murray under center is no surprise. Losing 10-6 to UCF in the Liberty Bowl? That was a surprise, especially for those of us who were expecting to see a football game.

You can chalk the 2010 season up to a case of the rebuilds. Aaron Murray was new, A.J. Green was in and out of the lineup, and Mark Richt was just hoping to get to 2011 with a job. Mission accomplished. Now make amends for that Liberty Bowl fiasco. Reparations!

How excited Georgia fans are for the 2011 football season 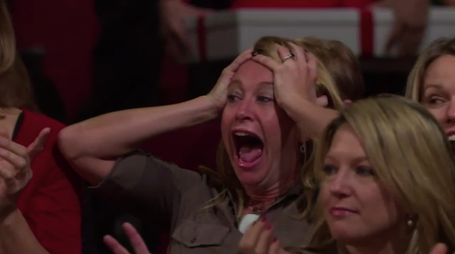 Too excited, in other words.

The debate: Georgia will win the SEC East and play for the SEC championship

You bet they will!

The Bulldogs return one of the SEC's most talented teams and play in the SEC's more woebegone division. The East is rather neutered this season, and Georgia avoids both LSU and Alabama on their conference schedule. The SEC is practically begging the 'Dogs to have a great year. I bet the South Carolina version of Gil LeBreton is just eating this up.

Get that corn outta my face!

Georgia will not make the SEC championship game because Georgia is Georgia. The Bulldogs are not big-game performers under Mark Richt, and in order to be SEC championship material - no matter how weak the division you play in or how fortuitous your schedule - you will need to win some big games at some point. That is not a Mark Richt specialty.

Agree or disagree? Share your thoughts in the comments.

Aaron Murray is the SEC's best quarterback, which is a huge compliment because the SEC is college football's best conference but also sort of a misnomer because I think we've all seen the quarterback play in the SEC. Occasional woof.

I find that when I need to explain how good a player is I often end up comparing him to a player I have seen before. Aaron Murray reminds me of Fresno's Ryan Colburn if NFL scouts had liked Ryan Colburn. Murray is a talented, hard-working kid who can make plays all over the field with his arm and his legs. He is a skilled quarterback, if not yet a complete quarterback. Encouragingly for Georgia fans, he is only a sophomore, so he still has time to develop that consistent, all-around game. Encouragingly for Bronco fans, Aaron Murray owns a man purse. 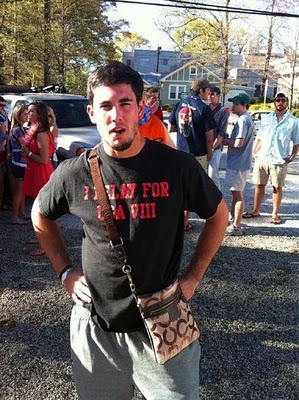 Georgia's offense summed up in a color

Offensive playmakers are not the problem with the Georgia offense. Healthy, ambulatory, verile offensive linemen are the problem. Academics and ACLs have rendered the Georgia O-line non-descript and not very good, which makes for a rather large weakness on an otherwise promising offense. Murray has weapons in preseason All-American TE Orson Charles and true freshman RB Isaiah Crowell, but a lot of good that does when Billy Winn is sitting on you.

Georgia's defense summed up in a sandwich

I like to think that the club is the 3-4 defense of sandwiches. It is chic and trendy and takes a little bit of getting used to, especially if you grew up Atkins. The Georgia Bulldogs are in Year Two of the 3-4 / club transition, so fans are understandably expecting bigger and better results. Gone is playmaker Justin Houston, but the Bulldog D might be better as a whole thanks to pieces and parts that finally fit. The largest piece: 340-pound nose tackle John Jenkins - a Duplo block in a world of Legos. Georgia has threatened to pair Jenkins with 325-pound lineman Kwame Geathers on the D-line, just to screw with that Jillian Michaels lady, I think.

Boise State vs. Georgia, September 3 - This date in history

The Broncos play Georgia in the Georgia Dome on September 3, 2011. For historical perspective and superstitious calendar karma, I turn it to Boise State's proverbial curator Tom Scott.

Boise State opens its season with a game that had been hyped for eight months, both locally and nationally (sound familiar?). The Broncos, ranked 18th in the preseason AP Poll, were visiting the 13th-rated Georgia Bulldogs before almost 93,000 fans in Athens and a national TV audience on ESPN. It ended up a day of infamy for BSU and quarterback Jared Zabransky, who threw four interceptions and lost two fumbles in the first half of a 48-13 loss.

Projected ranking for Georgia when the Bulldogs face Boise State

Georgia has been as high as the teens in some preview pieces and as low as unranked in others. A conservative estimate would be the high teens to mid-twenties when the official preseason rankings debut later this summer. Let's call it an even 24, based on my favorite television show about torture and moles.

The Georgia Bulldogs will be one of the nation's most scrutinized teams, starting immediately with their game against Boise State. To say that the season opener is more important for Georgia than BSU may not be that far off. A win and the Bulldogs could very well be a Top Ten team from midseason on. A loss to the Broncos followed by a loss the following week to South Carolina, and there are going to be some very upset Fran Tarkentons in Athens.

With apologies to Aaron Murray, this Georgia team will go as far as its offensive line will take it.

What are you feelings on the Georgia football team? Think they can win the SEC East? Is Aaron Murray the real deal? Share your thoughts in the comments.