Share All sharing options for: How breaking some rules and missing a kick made Boise State likable again

We owe a debt of gratitude to the women's tennis team, and to air mattresses, and to Kyle Brotzman's aversion to being clutch.

As strange as it may sound, the events of the past six months - Kyle Brotzman going wide and wider on two life-altering field goals and the NCAA getting its Matlock on for some rather benign couch-hopping - may turn out to be the best things that ever happened to Boise State fans. Last year, Boise State was the enemy. This year, we are the hardluck hero. Let's recap.

To be a Boise State fan last year was to know trouble - trouble in the form of trolling and vibe harshing and consistent streams of hateful word vomit. People did not like us because we were fans of The Resistance, destined to stick it to The Man whose mythical national championship most college football fans wished extinct - but not at the hands of a WAC school! What do you think this is? Major League Soccer?! 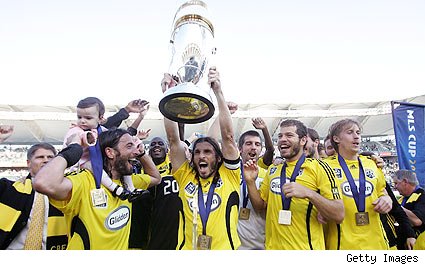 The Boise State Broncos were a really good football team, trapped in a really bad conference, and ipso facto, overrated and untested. Therefore, the Broncos were made into heels.

BSU's inexorable march toward college football Armageddon made its way through Sports Illustrated covers and prime-time wins and fifty-burgers against tragically poor WAC teams, and all along the way, the hate got hotter. There was no place to hide from the word "looser" or a monosyllabic discussion of SEC speed.

But a funny thing happened on the way to eternal vilification and BCS championship glory.

Kyle Brotzman and the horrible, no good, very bad kick

The Broncos lost to Nevada in one of the absolute worst ways possible, like how Hollywood football teams lose in movies where the purpose is to teach life lessons, except no one ended up in a wheelchair (Friday Night Lights) or imprisoned (Longest Yard) or with a heart that burst from overexertion right at the finish line (Iron Will - oh, spoiler alert). Worse, the Broncos lost to a bitter rival, on national television, blowing a halftime lead, and missing a gimme kick after a miraculous last-gasp heave toward the goalline. Boise State's worst enemies (Idaho fans) couldn't even envision such a cruel fate (because they are simple-minded). In a five-minute span, the Broncos went from the verge of BCS busting to Las Vegas Bowl middling.

But the loss - and more precisely, the nature of the loss - also did something that all Boise State's other accomplishments had failed to do: It humanized the team.

People were glad that Boise State would not be crashing the BCS championship game, but at the same time, they wouldn't wish a loss like that on anyone - mostly because opposing fans had experienced losses like that before. Humanity unites over tragedy. And this moment was as tragic a moment as college football had last year.

What made the loss sting so bad and also made it so relateable was that Boise State seemed to be immune from failure. The fickle nature of college football with its whimsy-based wins had never pulled one over on the Broncos. Sure, it was fun to root for a Boise State team who was toppling giants when it had no right to do so, but that story gets pretty old once David becomes Goliath and Goliath seems to get all the breaks. Now, give Goliath a "Do Not Push" button and then push the sucker, and all of a sudden, liking the big bad man with the weakness isn't so hard.

NCAA investigations and a lack of women's tennis control

Step Two in Boise State's image rehabilitation plan came down courtesy of an overzealous NCAA compliance investigation. What many schools consider to be a reputation killer couldn't have worked out better for the Broncos. A lack of institutional control for firing maverick coaches and sheltering out-of-towners in the most inconvenient way? I think Desmond Howard speaks for everyone:

You've got people robbing banks, but you worry about giving a parking ticket to a car parked in front of the bank? I think this discredits the NCAA in the eyes of a lot of people.

From the moment Boise State's NCAA news hit, people reacted with a universal, "Whaa?" followed by a universal "Bwahahaha." In a sport with six- and seven-figure pay-for-play scandals and perjure-loving coaches, the NCAA chose to send a message on this?

College football fans love themselves a good NCAA bash, and this one was served on a silver platter. The allegations proved to be an example of just how petty and moronoic and blind to the big picture college football's governing body truly is. And for as long as the Ohio State scandal and others like it remain in the spotlight, fans and media will keep pointing to the fact that cute, plucky Boise State got hammered for leaving its name off its paper while the rest of the class wrote the answers on their arm.

Again, a story like this could have been Boise State's darkest hour. Instead, it is an unexpected PR boost. Sure, the Broncos were wrong to overlook the letter of the law. But for three scholarships, six practices, and some Freedom of Information Act requests, you can't buy goodwill much cheaper than that.

The season of good times

Boise State is again a favorite to work its way into a BCS bowl and hang around the Top Ten all season long. But the mood around 2011 is much lighter than 2010. No one is signing up for OBNUG accounts to write FanPosts about Big Ten superiority. There are no ironic Tumblrs about how Boise State is al-Qaeda. I almost get the feeling that people want the Broncos to succeed again - like they feel we deserve it. And I guess we have Kyle Brotzman and Aero Insta-beds to thank.

Note: Forget I ever said any of this should Boise State be undefeated and ranked No. 3 in November. People will be hatin'.