Public Enemy No. 1: The case for Gil LeBreton

Share All sharing options for: Public Enemy No. 1: The case for Gil LeBreton

Most of the time, Fort Worth Star-Telegram columnist Gil LeBreton's white-hot homerism is non-threatening and adorable, like looking at an elephant at a zoo. But once that elephant gets out of its cage, comes over to your house, and starts stomping on your flower bed and pooping on your patio furniture, you have a problem. Elephant Gil LeBreton did some stomping and some pooping this offseason, and with Boise State on a collision course with TCU for Mountain West bragging rights, there is bound to be more where that came from.

You are reading a thesis on why Gil LeBreton is a purple turkey and deserves to be Bronco Nation's new Public Enemy No. 1. More candidates to follow; voting occurs next week.

LeBreton's body of work is probably a lot like LeBreton's actual body: soft, expansive, often acidic, and covered in glowing Gary Patterson references. There is nary a college football team or personality he is unwilling to mow down in the name of TCU football. Boise State has been a favorite of LeBreton's in the past. Here is an abridged version.

Boise State is in bed with the Mountain West - A PRISON BED!

Less than two months ago, LeBreton put free Arby's pen to free Hardee's stationery and pumped out an article bemoaning the fact that the Mountain West deigned to relocate the Boise State - TCU game. How dare they look out for themselves! LeBreton chose to fight this battle with his eternal weapon of choice: unsubstantiated rumor.

Patterson's disappointment with the MWC schedule, you have to remember, comes after the league allowed newcomer Boise State to influence the selection of the site of its game against the Frogs. Boise State officials have publicly dismissed their role in the decision, but another MWC school says the Broncos began pushing for it almost immediately after TCU announced it was jumping to the Big East.

Wouldn't we all like to know who that "other MWC school" is? Gil LeBreton, too!

... in the context of the investigative article, with its examples of gun-wielding linemen and robberies and assaults by other schools' players, TCU comes out smelling like, well, a rose.

Boise State, on the other hand, had the fourth-most players charged with crimes, 16.

As he is wont to do, OBNUG reader and Internet legend Mikrino pointed out the fallacy in LeBreton's whining with the best line of the offseason:

I'll just leave that there.

Boise State is afraid of playing good teams on the road, evidenced by the testimony of several unnamed athletic directors who may not exist

LeBreton's fear-mongering about a Boise State - TCU game in Boise began long before the March story quoted above. He cried "funny business" all the way back in January when the story was but a rumor. Of course, it wouldn't be enough to simply claim Boise State was pushing for the move. LeBreton also had to claim that the myth of Boise State's scheduling woes is untrue ... you know, like the moon landing, I guess.

Let's clear up one myth: Boise State likes to whine that nobody will play it. In truth, according to more than a few athletic directors, there are plenty of teams around the country that would like to schedule the Broncos. But Boise State won't play them unless they agree to a return game on that silly blue turf. Why not come to TCU this season for a final Frogs-Broncos farewell? Cowboys Stadium has an open date. I think we all know the answer.

The answer: Boise State does not schedule its own conference games.

Voters should look at the games, not the scores, especially after TCU plays a close game scoreboard-wise

Remember when TCU barely beat San Diego State last season? Gil LeBreton remembers it, and shudders. If it were up to him, football wouldn't keep score and simply award winners based on how good a team looked throughout the course of a game and what type of lizards were on what helmets. Also, Boise State is a joke.

On ESPN's weekly poll announcement show Sunday, commentators actually called Utah "a fraud" and anointed Boise State as "a team on the rise."

Imagine that. A team that just got shut out by Notre Dame being a fraud and an undefeated team being on the rise. World, you are taking crazy pills.

It was ESPN analyst Rod Gilmore who kept calling Boise State "a team on the rise" on Sunday's show.

Really? For beating a pitifully weak cross-state rival, Idaho, that would likely finish near the bottom in every conference in the land?

Shame on the Broncos for allowing Idaho to score 14

Have these people really been watching some of the games that Boise State has played? Louisiana Tech gained 394 yards on the Broncos, ran for 172 yards and had more first downs - 25-21 - all in Boise.

But because nobody watched, all the voters saw was the scrolling score, "Boise State 49, Louisiana Tech 20."

Leave it to Gil LeBreton to find a four-touchdown win fluky.

LeBreton wrote a column about the Vancouver Olympics where he compared Canada's patriotism to that of Nazi Germany in the 1930's. It's just LeBreton being LeBreton! 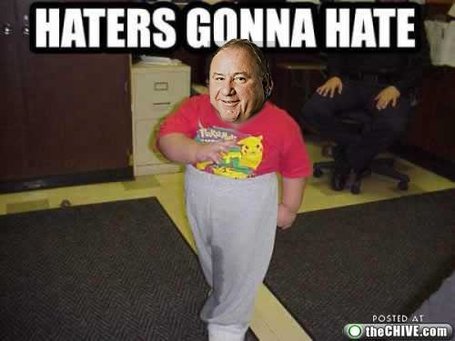 Yes, there is more. But thankfully the Fort Worth Star-Telegram hides its archives behind a pay wall so as to prevent the Internet from exploding.

With the Broncos and Horned Frogs set to embark down a path of inevitable collision this season, LeBreton is sure to come up with a handful of more ways to poke the Bronco Nation beehive. Gene Bleymaier is Stalin? The 2010 Fiesta Bowl never happened? Kellen Moore smokes pot, according to several unnamed pot dealers? I should probably stop giving him ideas. Bronco Nation should probably start considering LeBreton worthy of public enemy status.