Share All sharing options for: Public Enemy #1: The case for Roc Hoover 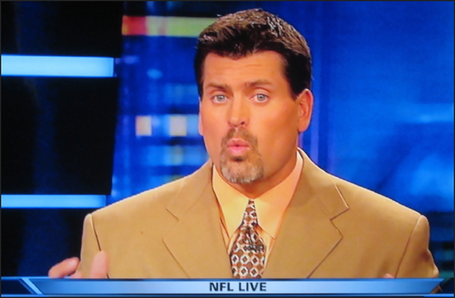 Mark Schlereth's career path is pretty typical. NFL lineman, TV analyst, soap opera star, chili magnate, subject of soon-to-be cancelled sitcom. I mean, Schlereth is really a renaissance man, if you think about it...and my hat's off to him. Unfortunately, Schlereth is also a Vandal—something he mentions about every 5 minutes—and this has so clouded the man's judgement that he scarcely knows which way is up.

You are reading a thesis on why Mark Schlereth aka Detective Roc Hoover is a toolbox and deserves to be Bronco Nation's new Public Enemy No. 1. More candidates to follow; voting occurs next week.

The networks really should be ashamed of themselves for enabling a man so clearly stricken with Vandal Delirium (VD). I mean, would a sane man say things like this?

For the record, Enderle's career TD/INT ratio was 74/60...he was sacked 115 times and had a career efficiency rating more than 60 points lower than Kellen Moore's. Great Bears pick.

Schlereth has been paid good money by ESPN to give analysis with at least a hint of objectivity and reason, but instead, he's become Uncle Rico in a suit. Bitterly clinging to the 80's version of his beloved Vandals—you know, when they were slightly relevant in 1-AA football—and letting no opportunity pass in which he can denigrate, subvert, or diminish Boise State's accomplishments. In short, he's a typical Vandal. Bitterness over Bronco success is what sustains them...that, and North Face sweater vests, soul patches, and Pabst Blue Ribbon.

Hey, it's no revelation that I don't particularly care for the Vandals...that's just how Bob Kustra and I roll. But here's the difference: I'm an uncompensated fan (donations accepted)...Schlereth is/was paid to be an impartial observer. Did Barry Switzer poo-poo the Broncos' Fiesta Bowl victory over "his" Sooners when he was asked to provide color commentary for the broadcast? Nope. Look, Schlereth can be proud of his roots and his alma mater, but you're an adult being asked to provide real analysis, not putdowns and blind loyalty. Would a "real" analyst say that Nate Enderle was a "great pickup" by the Bears? Would a "real" analyst take to the web to crap on Boise State after a Labor Day win against Va Tech (broadcast, for the record, on his own network)? Observe this twittery screencap (click to embiggen) from the night the Broncos took down the Hokies—does his timeline seem a bit...I don't know...sad? 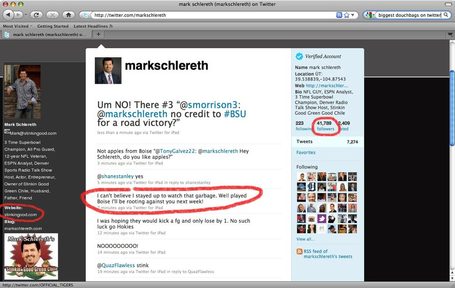 Oh, and at the time I circled things that I deemed (from left to right) sad, pathetic, and astonishing. More astonishing? He now has upwards of 90,000 twitter followers...I guess that's what one gets when they play Detective Roc Hoover on A Guiding Light.

For your Emmy consideration

Lucky for all of us, being a homer isn't a crime. Being a fake analyst with an axe to grind is. OBNUG pokes fun at opponents plenty, but provides actual game analysis regardless of who our opponents are and how much they are going to get thrashed. Schlereth thinks this is the 80s and the Vandals put a superior product on the field. He has made himself an enemy of the program and city...and for that, Roc Hoover Mark Schlereth deserves at heaping helping of scorn, and a bit of our public enemy pie. 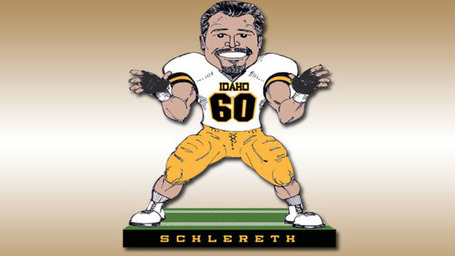 "Rawr...vote for me everybody" (Courtesy University of Idaho Athletics)