Share All sharing options for: People's Champion: The case for Bob Kustra 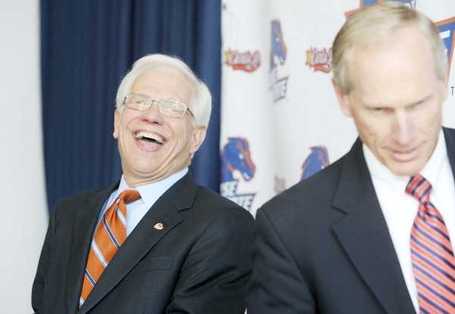 When Dr. Bob Kustra took the reins as president of Boise State University in 2003, nobody knew quite what to expect. Kustra was once Lieutenant Governor of Illinois...a state where politicians are just as likely to move into the White House as they are a maximum security prison. But, politician or no, the guy's gotten results—leading Boise State University into a time of unprecedented growth, prosperity, and prestige. So, I'm sure you'll all agree that the best part of Kustra's tenure was when he ripped on the Vandals and took potshots at the BCS. Four more years! Four more years!

Kustra has been the perfect leader for Boise State during the so-called "golden era" of Bronco football because he knows how to manage victory. Kustra has parlayed Boise State's gridiron success into campus expansion, academic advancement, and fundraising opportunities. Take Boise State's recently completed "Destination Distinction" capital campaign, for example—over $175 million dollars raised—don't think for a second that the profile of the football program didn't help them crack a few wallets. Kustra views the success of the football team not as a competitor to the academic success of the university, but a strategic partnership. The football team rakes in the dough and the spotlight, and Kustra and crew use it to fund scholarships, campus projects, and essentially "tell the school's story" to previously deaf ears. He's forged a connection between athletics and academics that not many college presidents are willing to make...but the fusion has been so effective that both areas have benefitted in huge ways.

Oh, and Kustra's not afraid to pick a fight either. He's spent the last few years telling anyone who will listen that the BCS stinks on ice and almost exactly a year ago, Kustra went all Howard Beale on the BCS calling them out for revenue discrimination...among other things. And Kustra still managed to work academics into the whole picture...what a guy.

"University presidents and others who care deeply about what higher education stands for should take a hard look at the chart. The lesson embedded in this chart teaches that it is fine to employ a system, such as the BCS, where the revenue is rigged in favor of some, at the expense of others, regardless of who performs better. That is the last lesson we should be teaching our students."

Kustra stayed on his anti-BCS warpath at last season's end when a BCS computer error put Boise State behind LSU in the polls. Kustra. Non-plussed.

"It's egregious enough to see teams with mediocre seasons climb into the BCS bowl games because they happen to be in privileged conferences, while others with better records are written off as second-class citizens. When we cannot see how these decisions are made, it becomes an affront to the concepts of integrity and fair play that we claim to value."

Obviously, the BCS is a burr under Kustra's saddle, but he made the most headlines last year by infamously (or is it "In Famously"?) committing the very forgivable sin of saying exactly what we've all been thinking about the Idaho Vandals.

"This is a great example of why my wife and I no longer travel to Moscow games,'' Kustra said. "It's a culture that is nasty, inebriated and civilly doesn't give our fans the respect that any fan should expect when visiting an away team. ... I don't think at Boise State you're going to find that, so for me personally, when I read what Pete said I knew, I knew."

Uh-oh spaghettios! Freudian slip much? Alright..I'll admit that someone in Kustra's position probably should've intimated this rather than throwing it out there...but man was that sweet! Kustra's comments got panties in a twist from coast to coast and probably saved many a flagging custom t-shirt shop on the Palouse, but y'know what? I secretly (okay, not so secretly) loved it. It was a nice glove slap to Robb Akey's "donkey" comments and was frankly, hard to argue with. I mean, have you ever been to a Bronco game at the Kibbie Dome? It's like "bring a mongoose to work day" at the cobra pit. If Kustra can rattle the cages of both the Vandals and the BCS in one calendar year...the man's a champion. A people's champion, no?

Is Boise State better off with Kustra at the helm? Were his Vandal comments over the line? Has Kustra ever heard of Just for Men? It takes Just Five Minutes.