Share All sharing options for: People's Champion: The case for Pat Forde 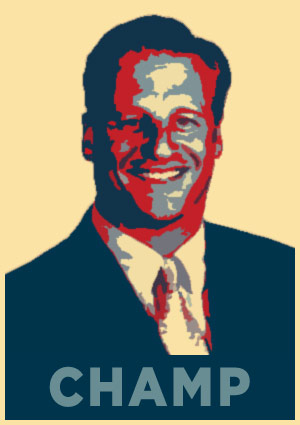 After the jump, I give ESPN's Pat Forde the treatment he deserves.

You are reading an essay on why Pat Forde is a saint and deserves consideration to be Bronco Nation's new People's Champion. Chadd Cripe was yesterday. More candidates to come. Voting to follow.

In a world full of doubters, haters, and Mark Mayses, Pat Forde stands alone as a voice of reason—pleading the case of the Broncos when it isn't politically expedient or popular. Forde could easily have chosen to join the naysayers and poo-poo the Broncos' SOS, find fault with their "unfair" turf, or disparage their lack of size or "elite" speed. Those things are all subjective...Forde focuses on facts: the Broncos are a fun, well-coached team of scrappers who win an awful lot of games. Heck, he's practically the Anti-May (not to be confused with Auntie May, Spiderman's legal guardian)—a fact which alone should put him at the front of the queue for 2011 People's Champ.

Take last off-season as a prime example of Forde's magnanimous nature. When most of the old guard were diving headlong off cliffs and ledges at the thought of Boise State beginning the season in the top five, Forde was crafting a 700-word essay arguing that they should start the season ranked number one. And you know what? It made sense—unlike Mark May's insistence that the Broncos should lose, and lose often, because of the non-traditional cut of their jib. To top that, throughout Boise State's 2010 season, Forde so championed the Broncos ill-fated quest for #1 that he compressed it into a single word: BUS.

Frankly, Forde's been driving the Boise State bus for some time. It might've began after Boise State's stylish win over the seven-time national champion Sooners of Oklahoma. Forde practically went all Grantland Rice about the upstart Broncos' timeless victory. Honestly, a lot of people did...but Forde has stuck by the Broncos side during their surprisingly rough transition from lovable underdog to much-maligned bully. Hey, we know all about it. Being a Bronco fan went from being kinda indie to being mainstream to being contemptible in just a few short years. The fanbase grew, but so did the haters...that's why having someone with the clout of Forde championing our cause has been huge. So I'm sure you'd agree, for all of Forde's efforts he truly deserves to be this year's People's Champ. After all, he's ascended to this coveted place in Bronco Nation by displaying some very Bronco-like attributes; trudging forward despite the naysayers and nincompoops...and winning™.

You can follow Pat Forde on Twitter @espn4d, check out an archive of his articles HERE, or buy his hair products HERE.

What is your take on Pat Forde? Is he the Frank Serpico of the corrupt ESPN establishment? Is his hair better than Kiper's? Share your thoughts in the comments.