Weekend comment thread: Pick three Broncos from the past to help Boise State in the present

Share All sharing options for: Weekend comment thread: Pick three Broncos from the past to help Boise State in the present

Not that this year's version of the Boise State football team needs much help winning conference championships and busting BCS bowls, but still, imagine how great things would be if you could add three all-timers to the roster. Nevada would go down so hard!

The question: If you could pick three former Bronco players to join this year's team, who would they be?

All players are eligible, provided they are former Broncos and not on the current roster. No Kellen Moore clones, okay? Share your picks in the comments, and continue reading for picks from me and the Statesman guys.

The inspiration for this question came from an Idaho Statesman college football chat a few weeks back. Here is the original question and the two responses from Chadd Cripe and Brian Murphy. 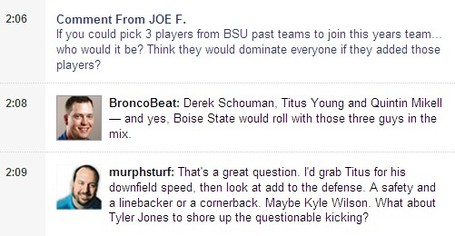 Marty Tadman. Boise State needs a safety, and Marty Tadman is both a safety and my favorite player of all time. That works out pretty well. I suppose I could have gone with Quintin Mikell here, but I do not have a Quintin Mikell shrine in my den.

Ellis Powers. For whatever reason, I remain skeptical of Boise State's nickels. Hunter White may be great, and Dextrell Simmons could end up being legendary. But for the time being, I'd feel much more comfortable with Ellis Powers - the patriarch of nickels - atop the depth chart.

What three players would you choose to add to this year's Boise State football team? Would the Broncos roll with the extra ammunition? Anyone willing to choose John Gott? Share your thoughts in the comments.