Share All sharing options for: Saying good bye to Nevada and then hello again in six months

Boise State officially says good-bye to the WAC this summer, leaving behind rivalries, mismatches, and a whole lot of memories. For the next week or so, OBNUG will be bidding adieu to each and every WAC team. Today: Nevada.

Recognizing that Bronco fans need an outlet for short people jokes (and what better target than Oompa Loompa Chris Ault), the Mountain West gave an invitation to the Wolf Pack to come join the WAC 2.0 beginning in 2012 and Gene Bleymaier upped the ante by adding UNR to the Broncos' schedule this fall. So saying good bye to Nevada is semantics more than anything. Good bye to the WAC days, which ended poorly. Hello to the next chapter of the rivalry, which will begin with the fire and brimstone of revenge.

After the jump, I take a trip back to revisit the Nevada- Boise State rivalry through the WAC years. Feel free to add your favorite Wolf Pack memories in the comments.

I think we all remember where that one win came from - uber-conspiracy by Reno goal posts and WAC officials. Moving on ...

The Bronco - Wolf Pack rivalry predates the WAC by a few years, the first three of which (mid-90's) were all Nevada wins. Oh how far we've come. The Broncos are 10-4 overall against Nevada, including nine wins in the first nine years of WAC play. Average margin of victory over Nevada during WAC play: 25 points. And yes, the Wolf Pack may be considered the Broncos' biggest conference rival. 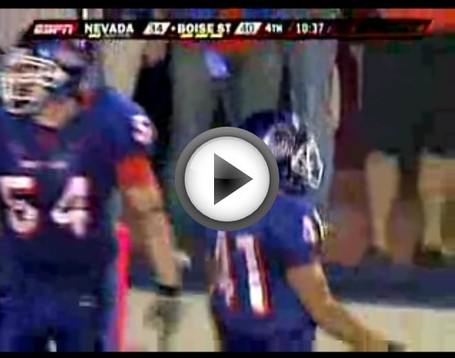 If you do not remember this game, then you either were born in 2008 or you go to bed by 10:30 every night without fail. This game spawned the Kapernick fear that took over Bronco Nation for years, interrupted only by brief peace whenever Kapernick passing highlights became available. A redshirt freshman at the time, Kaeperlegs made his first start against the Broncos in that 2007 game, and his 420 total yards and five touchdowns very nearly broke BSU's streak on the blue and definitely made for the closest scare since Houston Nutt days.

Kaepernick's career night was overshadowed only by Tim Brady's career night, and by that I mean the one tackle on Kaepernick in quadruple overtime to stop a two-point conversion and give the Broncos the win. That was the single greatest play of Brady's career, and apart from marriage, childbirth, and an inevitable midlife crisis where he dyes his hair blonde and buys a modded Segway, the greatest moment of his life. For what it's worth, the moment is fourth on the greatest moments of my life.

Meatloaf, "I would do anything for love" 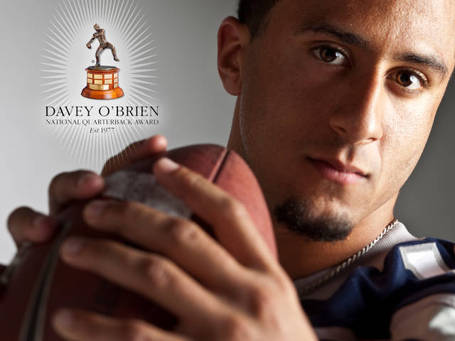 14. Made Kellen Moore share the WAC Player of the Year award last season

23. Was invited to a Manning passing camp, out of pity I assume

The 2008 season was supposed to be the one where Nevada stormed to the top of the WAC behind the omnipotence of Colin Kaepernick, but instead, the Pack got derailed by New Mexico State of all teams. Oh, the jokes I made after that one. The loss typified Nevada's existence in the WAC, where they were always good for an unexpected loss at one point or another. Had Nevada come to play every week, those Bronco - Wolf Pack battles could have meant so much more.

When Boise State will see the Wolf Pack again ...

The Wolf Pack were added to the 2011 schedule as a nonconference opponent because a) revenge and b) no one else was available. Next year, Nevada will be on the sched as a Mountain West rival, and the Pack could quite possibly secure a spot as one of the protected rivalries that the conference will award each team since the conference calendar only allows for eight games in spite of having nine opponents. Confused? Me, too. That was not a good sentence I just wrote.

What is your favorite memory of Nevada? Share your thoughts in the comments.