Share All sharing options for: Boise State spring practice report: Dan Goodale is the next Kyle Brotzman for now

The most improved player at Boise State spring football camp, according to coaches and confirmed by media people who thought maybe they heard the coaches wrong the first time, is walk-on kicker Dan Goodale from Boise's Timberline high school. How good has he been in spring camp? Good enough to make a 52-yard field goal ... in front of people. I'd say incoming recruit Jake Van Ginkel better watch his back.

Special teams coach Jeff Choate has raved about Goodale this spring, and the redshirt freshman seems to be ahead of fellow kickers Jimmy Pavel and Mike Frisina for the right to battle Van Ginkel to the footy death this fall. To assuage your fears about a little-known kicker possibly taking the reigns of the Bronco kicking game, know that Goodale has earned a reputation in camp for his long, booming kicks ... and he can dunk a basketball. Dan Goodale, ladies and gentlemen. 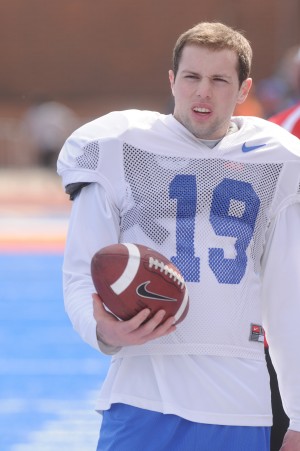 (Photo via Greg Kreller and the Idaho Press-Tribune)

Nickel competition down to Hunter White and Dextrell Simmons, or both, or both and Jonathan Brown

So basically, nobody knows.

Chadd Cripe covered the nickel position on his blog yesterday, and Cripe is firmly in the Hunter White camp, counting on White's experience and his January beach workouts to be the difference. Tom Scott sees it differently and hints in his Scott Slant column that Dextrell Simmons may be the man to beat because Simmons transferred from a JUCO and Winston Venable transferred from a JUCO and that is just too much coincidence to not mean something.

Ultimately, as Cripe concludes, this position may end up as a classic Bronco job share. I was thinking the depth chart could use another OR anyway.

The Magic-Valley Times ran a feature on the Boise State defensive line today, reminding readers how poorly that unit played in the first spring scrimmage then taking it all back in glowing homage to Shea McClellin. The local product was quoted extensively about his Bronco career, his defensive line compadres, and his relief at not having to play patty-cake with WAC teams any more.

"We try to be the most dominating defense out there," McClellin said. "If the teams in the Mountain West are more physical than the (Western Athletic Conference) teams were, then we're going to be pretty excited about that."

The current Gonzaga basketball head coach was on hand for Wednesday's practice, taking in the splendor of the Broncos' football facility, keeping it real with Leon Rice, and eliciting headline puns from Dave Southorn. The Idaho Press-Tribune reporter led his blog post yesterday with the title "A 'Few' Noteworthy Items." Get it? Because Few is both a person's name and a pronoun/adjective?

Southorn's pun proficiency has reached the point where he is openly calling his shots, putting puns in quotes, and leading his stories with tales of punnery greatness. It's just Southorn being Southorn!

Yes, I am the king of puns.

Dave Southorn, would you say that Dan Goodale has a leg up on the Boise State kicking competition? Oh. Never mind. You already said that.

Since Dustin Lapray could not be at practice because this is pilliated woodpecker season and the man has his priorities, OBNUG has dutifully decided to take over Lapray's reporting at Bronco camp. Here is his entry for Wednesday's practice:

With the drip-drop of a soft spring rain in his face and the enormity of expectations on his shoulders, Kellen Moore guided the offense with expert precision and a Sisyphean determination through wave upon wave of steeled red zone defenders. A scramble! A pass! A rainbow! A sunset! Were these tears in mine eyes or mere gentle rain? I am not telling.

Do you have any thoughts whatsoever about Dan Goodale? Who is your pick to start at nickel? Is Dave Southorn getting out of control? Share your thoughts in the comments.