Saying good bye to Fresno State...oh, who are we kidding?

Share All sharing options for: Saying good bye to Fresno State...oh, who are we kidding?

Boise State officially says good-bye to the WAC this summer, leaving behind rivalries, mismatches, and a whole lot of memories. For the next week or so, OBNUG will be bidding adieu to each and every WAC team. Today: Fresno State.

We had some good times against Fresno State, didn't we? There was that one time that we wrung our hands about playing them and then destroyed them and then that other time that we got super worried about playing them and then obliterated them. Oh sure, there've been a couple of contests in there, but there hasn't been much mystery about which team is the superior one on the gridiron. Fresno will be following Boise State to the MWC in short order, and we rounded out our 2011 schedule by playing them too, so this isn't as much a "good-bye" as it is a "Pat Hill mustache retrospective". Look at it this way, Bulldog fans, Boise State can't deny Fresno State the WAC title ever again.

When Boise State entered the WAC in 2001, it looked like we'd have to get used to playing second fiddle to Fresno State. I mean—they were nationally ranked, had a #1 draft pick under center, and a coach whose mustache scoffed at regular twin-blade razors. Then Boise State decided they'd rather be top dogs (no, pun intended) in the WAC and quickly erased Fresno State from the nation's conscience quicker than you could say "Anyone, Anywhere, Anytime". If you want to find some of the most effusive praise for the Boise State program over the last decade, get a subscription to the Fresno Bee or lend an ear to a Pat Hill presser. We're their betters and they know it. How sad.

October 19, 2001—Boise State was off to a 3-3 start to the '01 season; their first in the WAC and had gotten walloped by Rice two weeks prior. The David Carr-led Bulldogs were undefeated and had dropped Colorado, Oregon State, and Wisconsin in consecutive weeks. Fresno had reached #8 in the AP poll and basked in the glow of their very own SI cover. The Broncos certainly weren't supposed to put up much of a fight in Fresno and just take their lumps as new members of the conference. Boise State had other plans.

Despite trailing 28-14 at one point in the game and being outdone in nearly every statistical category, the Broncos attack just kept on coming taking a late lead on a Brock Forsey dive and a Jay Swillie grab that saw him bounce of a defender to scamper in for a score. The 'dogs added a late safety and made it down to Boise State's 5 with time winding down before Greg Sasser sacked Carr and forced a fumble. Game over. Like Levar Burton used to say on Reading Rainbow: "You don't have to take my word for it"...

I shouldn't have to explain this one to you. 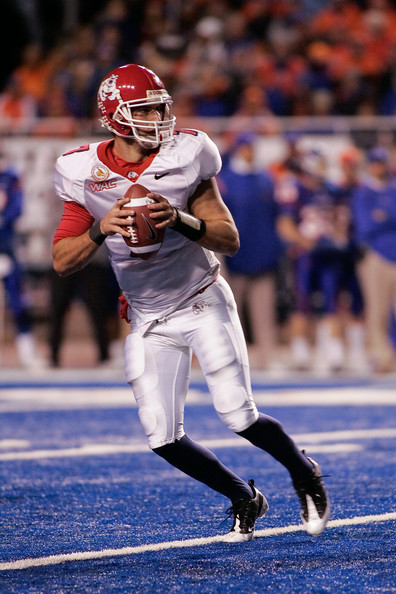 Weird. There aren't 5 Bronco defenders draped all over him so I'll assume this photo was taken during pre-game warm ups.

Since the Bulldogs aren't really going anywhere, it would be foolhardy to name anyone currently on the roster, so I will just pick one from their recent WAC-past to make fun of extol the virtues of talk about. "Touchdown" Tommy Brandstater "led" the Bulldogs from 2006 to 2008. "Touchdown" Tommy was actually his nickname...he never threw more than 18 TDs in a single season in his career. I am not making this up.

Truly, my favorite thing about Tom Brandstater was how he was the absolute poster boy for the stupidity of NFL coaching staffs, as he was coveted throughout his collegiate career by league scouts and agents who fell in love with his frame without realizing that he possessed none of the other generally sought-after attributes of a starting quarterback.

October 28, 2008—A token senior night start for Bush Hamdan started as poorly as one could as he promptly threw a pick-six on his very first attempt of the evening. The subsequent 13-10 halftime lead that the Broncos clung to had more than one person in my section of Bronco Stadium muttering about Coach Pete's senior night gesture "costing us the game". Silly fans.

Before most of the crowd could get back with their nachos for the 3rd quarter, the Broncos had reeled off 28 unanswered points, to which they promptly added 20 more in the 4th. Kyle Wilson had a punt return touchdown, Ian Johnson made a sideline curtain call after scoring two late TDs and the Broncos celebrated another WAC championship with Bronco Nation on the blue turf and under a shower of fireworks. Misty watercolor memories.

When Boise State will see the Bulldogs again ...

And here you were worried that David Carr's scrappy little brother wouldn't have a chance to avenge him.

Yep, the Broncos rounded out their 2011 schedule by adding ex-and-future conference mates Fresno State and Nevada; not allowing the Bulldogs much of a respite after a 51-0 trouncing at the hands of the Broncos last season. I, for one, am happy that the Bulldogs will be following us to the MWC...there's always something in the air on game week that belies the actual results of the last decade of meetings between the schools. The Broncos have the Bulldogs' number...but you never know when it might actually be a game—and "a game" is generally more than most other teams in the WAC usually gave us.

What is your most memorable memory of Fresno State? Share your thoughts in the comments.