Commenter mock draft: Picking a play-by-play voice for your life

Share All sharing options for: Commenter mock draft: Picking a play-by-play voice for your life

The NFL Draft has been dissected and analyzed and guessed at by pretty much everyone who knows anything and several people who don't (obligatory Bleacher Report link). We know Titus Young will get drafted tonight. We know Tennessee will regret drafting Jake Locker. We know that is not Chris Berman's real hair.

So with draft analysis in good hands, I thought it would be fun to spend our Friday on a lighter topic. Inspired by the gang at NFL blog Kissing Suzy Kolber, your OBNUG editorial team is inviting you to participate in a mock of mock drafts. The topic: What media voice would you want narrating your life?

The mock draft rules and the first few picks are after the jump. Let's see who you guys will pick. (Note: Dick Tomey and Dick Tomey Without Meds are two different people.)

Contribute your picks in the comments. The only thing we ask is that you wait at least three picks before you select a second time (or a third or a fourth ...). Feel free to add a sample play-by-play call if you're so inclined.

As determined by how well we did (or didn't do) in OBNUG Pick 'Em contests:

Lundquist has a couple things going for him: 1) he looks like Santa and 2) I already hear him in my head every September through December so why not hire him full-time for my life play-by-play? "Ho boy! That looked like a tasty Pop-Tart!"

I know he's the hot announcer right now and he's coming at the risk of being overhyped, but I think I think my life would all of a sudden become exponentially more epic if he was narrating it. Either that, or he can just convince everyone else that it is. 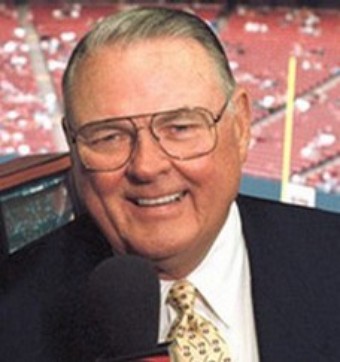 It'd be great to have Jackson around for when I forgot my wife's birthday "Fum-BLE!" or when I ate too much of the Olive Garden's never-ending pasta bowl "Whoa, Nellie!"

The man knows how to gently caress his audience and guide them through the nuances (e.g. boring aspects) of baseball like no other. He'd be perfect for my work life.

6. Drew - Curse you, Nick...I was going to get after Scully next. Back-up pick: the late Harry Caray

I loved Caray because he couldn't really control the volume of his voice. Having someone bellow "HOLY COW!" at opportune or inopportune times in my life would be a real treat. Also...half the time he'd probably call me Ryne Sandberg.

No idea who Randy Moeller is? Listen to his calls of Florida Panthers goals, and he will make you a Florida Panthers fan. As my life narrator, I am hoping he will do the same for Max Corbet RE: me.

The man may have to step away from calling Triple Crown races due to performance anxiety, but I'm pretty sure he could keep track of all my horses down the stretch if you know what I mean... #winkwink

I would always be on the lookout for guys with the last name "Frazier" to knock down just to hear his famous call a few more times. Plus...Cosell could say something benign that would be construed as racist and be replaced by O.J. Simpson.

I have always wanted to be called Kelvin Leek.

I've always wanted to have some routine part of my day be made into a joke featuring obscure pop-culture references. "Drew just made Franz Kafka look like Conan the Barbarian"

Who do you want doing the play-by-play for your life? Share your picks in the comments. Don't forget to wait a few picks before going again so that everyone gets a turn. David Augusto's family's voice must be heard.