When Drew and I put our heads together, there is no limit to our Boise State homerism. This fact will be obvious when you feast your eyes on our 2011 NFL Mock Draft. We predicted the first 15 picks of tomorrow night's first round (Drew took the evens, I took the odds), and if the draft goes anything like we've envisioned, Bronco fans will be in for a treat. Let's get drafty.

Little known fact: There are a lot of former Toledo players in the NFC South, so even though experts expect Cam Newton to go No. 1 overall, the prudent move for the CarPants would be to draft Jarvis Hodge, Destroyer of MAC Safeties.

Given Coughlin's propensity for backing up legendary, squeaky-clean quarterbacks, the Denver Broncos seem like a great fit. This of course, assumes that Tim Tebow will remain the starter and that Kyle Orton's neckbeard doesn't grant him any magical powers before the season.

The Bills are always in the market for some big-play, flashy players, mostly because having Harvard-educated, bearded Ryan Fitzpatrick as your quarterback automatically docks you several hundred cool points. There exists a very real possibility that Young will have an extended holdout because, in the inevitable words of Young's Twitter feed, "Buffalo is da HAM. #freetitusyoung"

Nisby was kicked off the team last week for a no-holds-barred brawl at a local watering hole. The Bengals seem to like this sort of thing.

Cleveland has a thing for Drew Carey and King is the closest thing we have to Drew Carey. 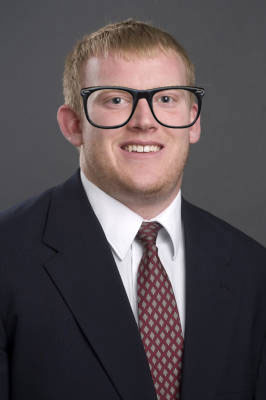 See what I mean?

The thought here is that San Fran would take Enderle to serve as a very inferior backup to former No. 1 overall pick Alex Smith, in order to boost Smith's confidence and maybe possibly turn him into not a gigantic failure. A similar strategy the Niners hope to employ: Scheduling Pitt.

I've heard that Nashville has some amazing spare ribs. Keo's been looking for some spare ribs since this happened.

You can never have too many wide receivers, especially when one of them is Roy Williams.

Let's be honest. Washington could use all the nickels it can get. Dimes and quarters even.

The San Francisco 49ers may trade back into the first round to draft Nevada QB Colin Kaepernick once they find out that Nathan Enderle has abused the pre-draft buffet circuit and must be moved to offensive tackle. The Niners hope that Kaepernick's lack of true quarterback skills will make Alex Smith feel better about life.

The Lions may employ the oft-overlooked NFL Draft loophole of "dibs" to ensure the services of Martin when he becomes eligible in 2012. In the meantime, Detroit would be allowed to use parts of Brock Forsey, Ian Johnson, and Jeremy Avery to build a composite running back who can score touchdowns (Forsey), knit (Johnson), and fit through jail bars (Avery).

Steve Spagnuolo LOVES to blitz. Janoris Jenkins LOVES to get blitzed. This is a match made in heaven.

The Dolphins could use a shot in the arm from an executive who thinks outside the box. And what better outside-the-boxer than Bleymaier? First order of business: Make the Dolphins a publicly traded company ... in Qatar. Second, show all the team's games on FOX Sports Miami and the Oprah Channel. Third, paint the field a different color. The NFL may have passed a rule about no non-green fields, but they didn't say anything about midfield logos that span goalline to goalline. Outside-the-box enough for you?